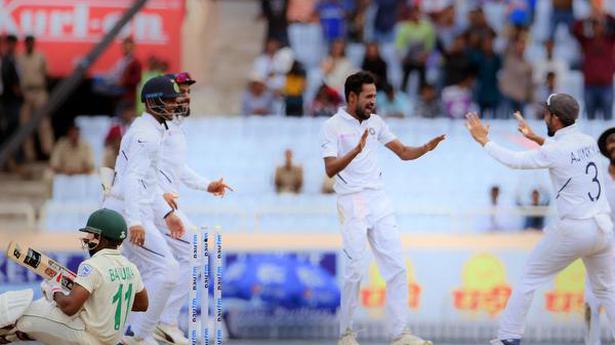 Shahbaz Nadeem enjoyed himself at the JSCA Stadium on Monday. He claimed his maiden Test wicket with a ripper, finished with two for 22 in the first innings, and later ran George Linde out with a superb throw from square-leg. When he was sent to the boundary’s edge to field, Nadeem received a hero’s welcome from the crowd, thrilled to cheer for one of their own. It hasn’t been a bad Test debut.

“After watching cricket on TV for so long, I had dreamt that even I would appear on TV one day, so people could see how I performed,” he said. “You cannot ask for a better debut than to play your first international match on your home ground, where you have played since your childhood. It’s a dream debut.”

Nadeem had to wait a while for his India cap. He had played 110 First-Class games over 15 years before the call finally came. He was performing Namaaz at home in Kolkata, where he now lives, when the phone rang. “It was around 2:30 p.m. on Friday and I was reading Namaaz when my phone kept ringing. I completed my prayers and saw that I was being called for the Test. When you’ve played cricket for so many years, you’re ready to play at 6 a.m. in the morning after getting a 4 a.m. call,” he said.

Nadeem finished with more than 50 wickets in two successive Ranji Trophy seasons (2015-16 and 2016-17), but received no India call-up. How had he motivated himself during those years of waiting, he was asked. “This was my motivation, that if something happened to someone, I might get a chance,” he laughed. “Because our spinners are doing well. As a cricketer you have to be realistic and see whether the spot you’re fighting for is vacant. Otherwise you have to keep hoping… ke kabhi mil jaayega [that you will get it someday].”

If Nadeem was nervous, it did not show. He was on target from the beginning, and conceded under two runs an over in the first innings. “When you play 110 matches, you gain that experience,” he said. “The 15 years I have put in playing for Jharkhand and recently India-A helped me make a smooth transition.”

He may have been awaiting that India call-up, but playing for Jharkhand was no less enjoyable, Nadeem stated. “I’ve known my teammates since our junior days; we have a lot of fun playing for Jharkhand,” he said. “It’s a different feeling. No matter where I’m playing, if a Jharkhand game is going on, I feel like going there and playing too. Because there’s not just the match; there’s also the friendship of people, there’s hansi-mazaak.”

South African Zubayr Hamza, also spoke after the day’s play. He said, “To have almost been bowled out twice in just less than two days, it’s pretty poor from our side. We struggled in terms of in our defences, and they bowled pretty attacking lines. We haven’t been good enough to keep those good balls out.

“I wouldn’t say we were under-prepared against their seamers. Maybe we should have prepared more mentally in terms of playing them in whatever conditions.”

It just took two strong performances from Australia to sow the seeds of self-doubt in the minds of the Virat Kohli-led Team India. Each victory, riding on 300+ totals, chipped away at India’s confidence, gained after pulling itself out of difficult situations in the first two One-Day Internationals. Standing taller Though the series stands at […]

‘Arthur was assured of extension after WC but Imran rejected it’

Former Pakistan head coach Mickey Arthur was assured by an influential group of cricketers that he would be retained for another two years after the World Cup but Prime Minister Imran Khan rejected giving extensions to the coaching staff. According to a highly reliable source, an influential member of the Pakistan Cricket Board (PCB)’s Cricket […]

No IPL, no problem! Here’s how star cricketers are keeping themselves busy during lockdown

CSK’s Harbhajan Singh has come a long way from eating cornflakes for dinner to now experimenting with every meal he cooks. The former Indian spinner is not alone. Shikhar Dhawan, for instance, has dropped his bat for something else made out of a piece of wood. Source: thehindu.com Related