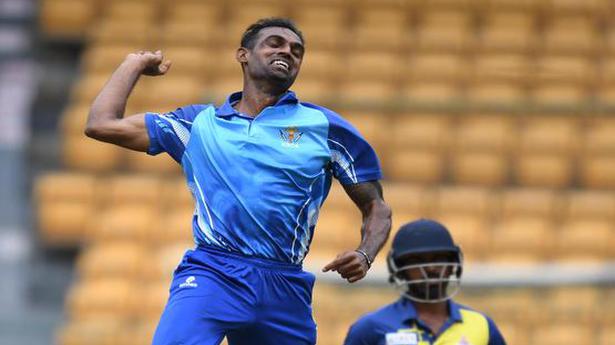 Karnataka fast bowler A. Mithun recorded the first ever hat-trick in a Vijay Hazare Trophy final when he got Tamil Nadu’s Murugan Ashwin to sky a catch to K. Gowtham at cover.

His five-for took him to the top of his team’s wicket-taker list (20 wickets). Earlier in the day, Mithun had given Karnataka the perfect start by getting opener M. Vijay to edge an outswinger for a duck.

The pacer’s fine performance set his side on the right path in the summit clash.

It has been a good start to the season for Mithun, who is now without his long-time pace partner Vinay Kumar. With Vinay having moved to Pondicherry, Mithun has taken over the mantle of leader of the attack.

“When we go into a match, everyone knows their plans and strengths, so there’s very little for me to say. If anyone needs any help, I go and talk to them. Prasidh wants to play at the next level. If you have that mindset, you know what you are doing.

“Koushik is also bowling in good areas. I don’t want to say much to him either,” Mithun said.

On his hat-trick, Mithun said, “In the absence of (the injured) Prasidh, as a senior, I had to take responsibility and do well.”

Lyon not for four-day Tests

The ICC’s proposal to introduce four-day Tests has met with stiff opposition from leading Australia spinner Nathan Lyon, who termed it “ridiculous” while chief coach Justin Langer is also not in favour of tinkering with the traditional format. “I’m totally against it and I hope ICC aren’t even considering it,” Lyon said on The Unplayable […]