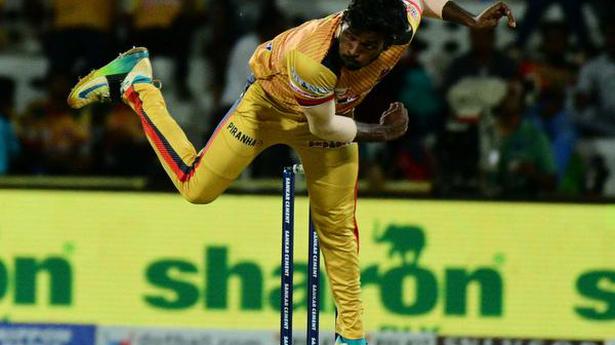 Former India opener Abhinav Mukund does not find a place in the Tamil Nadu squad for the Syed Mushtaq Ali Twenty20 tournament.

Matches in group ‘B’, that includes Tamil Nadu, will be held in Thiruvananthapuram from November 8 to 17. State side’s principal challengers from the pool are Uttar Pradesh, Vidarbha, Rajasthan and host Kerala. The top two teams progress to the next stage.

He said to The Hindu here on Tuesday, “Abhinav had a fine Vijay Hazare tournament where we did very well to reach the final. But the panel felt his game is more suited to Ranji Trophy and one-day cricket where he is an automatic choice.”

Senthil elaborated, “Abhinav doesn’t play a lot of Twenty20 cricket too. We discussed his name. It was a hard decision to leave him out.”

The selection panel chief added, “And we have youngsters such as N. Jagadeesan and Hari Nishaanth who have done well up the order in Twenty20 cricket. Then we also possess the experienced M. Vijay who has had his moments in this format.”

The Dinesh Karthik-led team also has star off-spin bowling all-rounder R. Ashwin. Senthil said, “Ashwin will be there with us till the Test series begins against Bangladesh. Then Washington Sundar will join the team, after the completion of the Twenty20 series against Bangladesh.”

G. Periyaswamy, the slinger who caught everyone’s attention in this year’s edition of the TNPL, finds a place too.

Senthil said, “Periyaswamy has a unique action and it is not easy to pick him. But it was a tough choice between him and Athisiyaraj Davidson, who too is a slinger. In the event of an injury, Athisiyaraj could join the team.”

The team is expected to have a short camp in Chennai, Tirunelveli or Dindigul — depending on rain in these areas — from October 31 to November 5 before leaving for Thiruvananthapuram.

Washington Sundar will join the team after the completion of the Twenty20 series against Bangladesh.

When Prime Minister Narendra Modi applauded the efforts of Capt. Swati Rawal and Capt. Raja Chauhan of Air India Boeing 777 that airlifted 263 Indians, mostly students stranded in Rome, it was an appreciation to cherish for the crew of that historic flight on March 22. Among those engaged in the operation was senior purser […]

I didn’t announce any retirement: Gayle

West Indies’ third one-dayer against India here appeared to be the last international match for Chris Gayle but the ‘Universe Boss’ has suggested after the game that he has not yet retired. The 39-year-old Gayle played the third ODI, which India won by six wickets under D/L method, on Wednesday with a special ‘301’ jersey […]

The Vijay Hazare Trophy’s Elite Group A suffered a complete washout for the second straight day, with all three scheduled matches called off without a ball bowled. Mumbai vs. Jharkhand (Just Cricket), Hyderabad vs. Goa (Alur 2) and Kerala vs. Chhattisgarh (Alur 1) all had to be abandoned on September 25 as overnight rain led […]