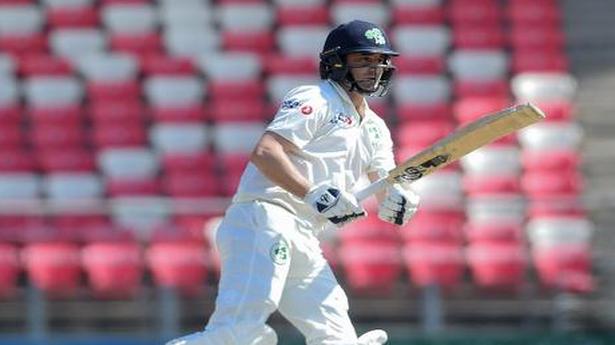 Tim Murtagh struck a rearguard half-century to lift Ireland to 172 all out in their first innings against Afghanistan on the opening day of the one-off Test match between the two sides in Dehradun on Friday.

Coming out to bat at no.11, Murtagh remained unbeaten on 54 off 75 balls as Ireland top-order batsmen failed to stitch partnerships after opting to bat.

The 87-run last wicket stand between Murtagh and George Dockrell (39) was the only the notable partnership in Ireland’s innings which folded up in 60 overs.

Murtagh scored his runs with the help of four boundaries and two hits over the fence.

In reply, Afghanistan ended the day at 90 for two in 31 overs.

Mohammad Shahzad (40) and Ihsanullah (7) were the two Afghan wickets to fall with left-arm orthodox bowler James Cameron-Dow (2/35) being the beneficiary on both occasions.

Rahmat Shah (22 not out) and Hashmatullah Shahidi (13 not out) were the two unbeaten batsmen at the crease.

At stumps on day one, Afghanistan still trail Ireland by 82 runs with eight wickets in hand.

Both Ireland and Afghanistan are playing their second Test after making their five-day debut last year.

The Board of Control for Cricket in India (BCCI), on Friday, announced the appointment of its three-member Cricket Advisory Committee. The committee comprises Madan Lal, Rudra Pratap Singh and Sulakshana Naik. The term of appointment will be for one year. Madan Lal, member of the 1983 World Cup-winning team, represented India in 39 Tests and […]

How did it all begin, we ask ourselves in these unsettling times. Not the pandemic — we know the answer to that one — but our personal passions. It is not just television that is replaying old matches and connecting us with past experiences; our minds are doing that too. In the winter of 1967, […]