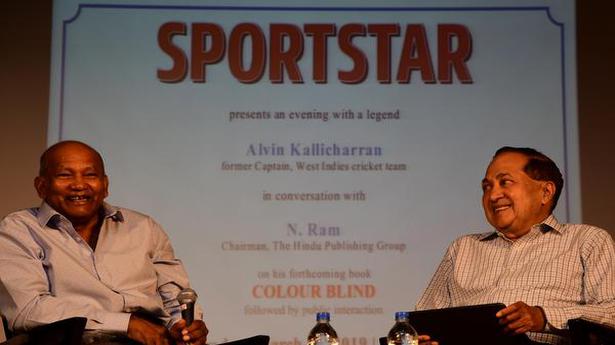 Alvin Kallicharran was not just about sparkling footwork, immaculate balance, wonderful timing and loads of courage.

Behind his cricketing achievements is a tale of struggle and sacrifice. He has overcome odds, broken through barriers.

From a childhood of poverty and hunger in Guyana — he had 11 siblings and as many as 20 people slept in his tiny house — to captaining the West Indian team it is a story of the triumph of the spirit.

In an riveting conversation with N. Ram, Chairman, The Hindu Publishing Group, the former left-handed great had the audience captivated with his words of immense wisdom about life in general, cricketing insight and sense of humour.

It was his 70th birthday and Kallicharran celebrated it in the city of his roots, talking about his upcoming book Color Blind and answering probing questions from Ram in an event presented by Sportstar at the Kasturi Srinivasan Hall, The Music Academy, here on Thursday.

Kallicharran was applauded and cheered on by the gathering all through the session and he turned emotional at the end of it all with tears rolling down his cheeks. “I want to thank the people of Madras for all the love and affection they have shown me.”

When asked about his early days, Kallicharran replied he did not have the means to afford a bat. “I would cut a piece of wood and use it as a bat. Then I would make a wooden ball and roll rubber bands over it. I would tie the ball to a tree and then practise all my shots.”

Kallicharran revealed, “When in school I used to come home at night after playing and find no food. Then I would do menial labour to earn money to buy hot food.”

When posed a question about the title of the book, Kallicharran replied it was about fighting racism all his life by living through it and not reacting.

Along the way, he had to cope with the Afro-Caribbean community in Guyana, and the whites in the various cricketing nations. He had a run-in with Aussie pace bowling great Dennis Lillee who sledged him, but chose to focus on his batting.

Kallicharran led a rebel West Indian team to South Africa in the early 80s but, despite the criticism, Kallicharran said the trip took top-flight cricket to the blacks and the coloured people in the West Indies like never before.

“We went to areas like Soweto. And the blacks and the coloured were delighted to see us defeating the white South African team,” Kallicharran said.

Interestingly, Kallicharran did not join the Kerry Packer Series. “I would have signed but Warwickshire said they would not renew my contract if I signed.”

Kallicharran spoke on the importance of role models and dwelt on the influence of Rohan Kanhai and Garry Sobers.

And Sobers and Vivian Richards were the greatest cricketer and the batsman he had played with or seen. In India, Sunil Gavaskar was the technically most accomplished batsman.

Interestingly, Ram had reported on the Test match where Kallicharran made a brilliant 124, among the greatest innings against spin, on a rain-affected pitch against the feared Indian spin attack in Bangalore, 1974. The Caribbean great exchanged views with former India leg-spinner V.V. Kumar on the importance of picking a spinner from the hand.

As Ram said, it was an evening to remember with this West Indian charmer who had “integrity and values.”