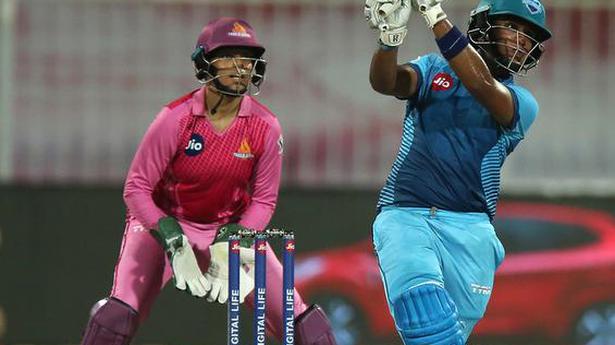 Sets up a clash with Trailblazers after a thrilling two-run win; Velocity knocked out on net run rate

When Chamari Atapattu gets going, she is a delight to watch. Her splendid 67 (48b, 5×4, 4×6) took Supernovas to what proved a match-winning 146 for six against Trailblazers in the Women’s T20 Challenge at the Sharjah Cricket Stadium on Saturday.

Earlier, the defending champion may have expected to end up with a bigger score, but losing three wickets in the final over — all through run outs — didn’t help.

But Atapattu had done enough to ensure that Supernovas was very much in the contest and tournament. The left-hander from Sri Lanka had made 44 in a losing cause against Velocity, but not briskly enough in the opening game. On this night, she seemed determined to score at a better strike-rate and did. With her opening partner Priya Punia (30, 37b, 3×4) struggling early on, the onus was Atapattu to find the runs.

Though Priya was finding the fielders with amazing regularity — it took her 16 balls to hit the first four — she eventually broke the shackles and added 89 for the first wicket in 12 overs with Atapattu before falling to a fine, diving catch at deep mid-wicket by Deepti Sharma off off-spinner Salma Khatun.

A few balls later, Atapattu reached her fifty, courtesy a misfield by Jhulan Goswami on the boundary. She didn’t need such generosity from the fielders most of the time, though, as she played some lovely strokes all over the ground.

O’Brien pulls it off for Ireland

Kevin O’Brien hit a last-ball six as Ireland clinched a consolation Super Over win against Afghanistan in the third Twenty20 international here on Tuesday. With three needed for a off the final ball, O’Brien cleared the long-off fence to end his team’s 12-match losing streak in T20s against the Afghans. Ireland had made 142 for […]

CSK needs to dig itself out of a crater

Even winning six of its remaining seven matches may not be enough Source: thehindu.com Related