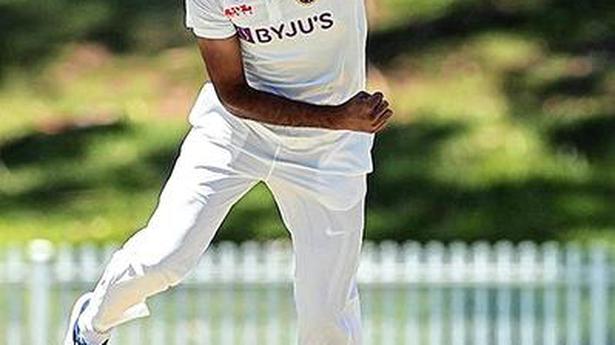 Umesh and Ashwin put up a fine show.

Senior pros Umesh Yadav and R. Ashwin staked a strong claim for a spot in India’s playing XI for the first Test, with impressive performances against Australia-A on Monday. Australia-A scored 286 for eight on the second day, riding on Cameron Green’s unbeaten century.

Australia-A took a 39-run lead after India-A declared its first innings at 247 for nine in the first hour, with skipper Ajinkya Rahane remaining unbeaten on 117.

Umesh removed openers Will Pucovski (1) and Joe Burns (4) in his third and fourth overs to make initial inroads.

For Australia-A, giant all-rounder Green continued his rich vein of Sheffield Shield form with an unbeaten 114 off 173 balls with 10 fours and a six. He added 104 for the sixth wicket with Tim Paine (44), after the team was reduced to 98 for five.

Another 49 for the eighth wicket with paceman Michael Neser (33) ensured that Australia-A had recovered from a collapse.

India tour of Australia | Indian contingent reaches down under