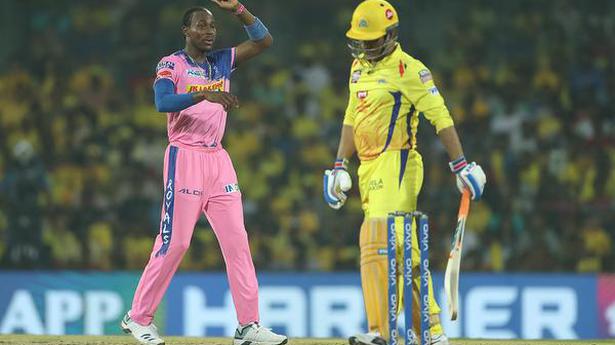 Someone planning an adhesive advertisement can take inspiration from this IPL season. What with all those visuals of the ball hitting the stumps, zing bails flashing, but just refusing to come off?

It has happened thrice this season, within a week, in fact. The first was in Chennai when M.S. Dhoni got an inside edge off Jofra Archer but the bails stayed intact despite the ball hitting middle and leg stumps.

Dhoni hadn’t opened his account and Chennai Super Kings was 28 for three. Captain Cool went on to make 75 not out and led his team to an eight-run win over Rajasthan Royals.

“It would have been game over for Chennai,” Archer told The Hindu. “Only the second time such a thing has happened to me.”

In the second incident, Dhoni was at the receiving end. Against Kings XI Punjab his direct hit caught K.L. Rahul short but the bails refused to budge.

Kolkata Knight Riders’ win over Royals here on Sunday was even more emphatic (by eight wickets).

But, the game could have been a little more interesting if opener Chris Lynn had to depart in the fourth over, after playing Dhawal Kulkarni onto the stumps.

The leg-stump was swayed by the impact, but the bails weren’t. Not just that, the ball went past the fine-leg boundary.

Kolkata was 37 for no wicket at the time, with Lynn on 13. The Australian went on to make 50 and put on a match-winning 91 for the opening wicket.

The incident came up for discussion, of course, at the press conference.

“It is already tough on bowlers in the T20 format,” Royals captain Ajinkya Rahane said at the post-match press conference. “In such situations, I feel those balls could be called dead.”

Former England captain Michael Vaughan went a step further. “If the bails flash… it has got to be out,” he said in a panel discussion after the match. “That is got to be where the line is.”

Virender Sehwag will deliver the seventh Mansur Ali Khan Pataudi Lecture in Mumbai on January 12. This was confirmed by BCCI president Sourav Ganguly to Sportstar on Thursday. The BCCI awards will also be given away on the same day. Earlier, it was speculated that Sachin Tendulkar could deliver the memorial lecture, which is being […]

Warne banned from driving for 12 months by London court

Former Australian spin legend Shane Warne has been banned from driving for 12 months after he was found guilty of over speeding for the sixth time in two years. The 50-year-old former leg-spinner pleaded guilty at Wimbledon Magistrates’ Court for driving at 47mph in a 40mph zone in a hired Jaguar car in Kensington in […]

Mumbai batting stalwart Amol Muzumdar was on Monday appointed batting coach of the visiting South African team for the Test series against India beginning October 2. The 44-year-old, who made 11,167 first-class runs at an average of 48.13 but never got to play for India, confirmed the appointment. “I was approached last week and I […]