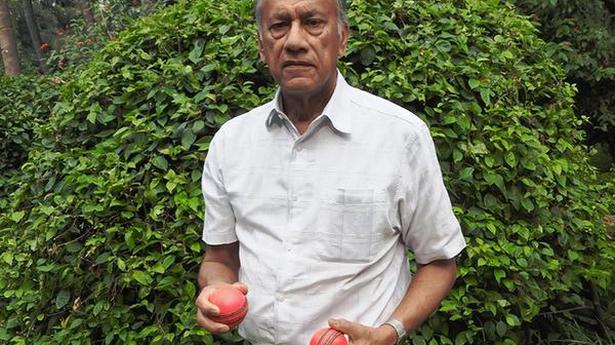 After much reluctance, India will finally play its first-ever day/night Test at the Eden Gardens against Bangladesh later this month. But more than the cricketers, all eyes will be on the SG pink ball that will be used for the very first time.

Keeping a keen eye will be Dilip Jajodia, the India-born owner of British Cricket Balls Limited, the company that manufactures the Dukes ball, used in England and West Indies. Jajodia maintains that he is in no hurry to penetrate the Indian market, despite words of appreciation from Virat Kohli and R. Ashwin during India’s tour of England in 2018.

The 74-year-old, during a personal visit to the city, spoke on the various facets of pink ball cricket. Excerpts:

How different is a pink ball from the regular red and white?

The basic construction is exactly the same but just painting the ball pink won’t do it. It’s the leather which is treated differently. We dye through, put a pigment on top which is a bright colour and preserve it through polish. Other than that, the seam colour is different. It’s black but it is the same thread. So there is no difference. A bowler should feel very comfortable.

How does the pink ball counter the dew factor?

Because of the surface connection, it has to be water resistant. That’s very important. And as long as you keep drying it and keep it in good nick, it is fine.

It’s strange. Administrators are happy to adjust their game to suit the ball. It should be the other way round. The ball supplier should be prepared to cater to the game.

There are doubts if a pink ball can last 80 overs…

Take the white ball. It has the same leather, a pigment and a protection. If a protection works on white it will work on pink and vice versa. We have proved that we can produce a white ball that can last 50 overs. The ICC has continuously tested it in associate tournaments. There has been a lot of misinformation that has cost the game a lot of money because of the use of two balls. The ICC feels it wants to go back to one ball and it is possible.

The ball has to be made for the conditions, be it any colour, and not the other way round. I am for a bespoke approach and I believe the pitches around the world are different. The ball is basically the same but with different touches for different conditions. So we have a ball for England, ball for Australia and so on.

We can do it for India, too. But it has to be given a proper chance. I understand there are difficult considerations. We are patient. It took us 30 years to get into Australia. If you believe in something, you have to put your head down and keep going.

Keeping them fit will be the biggest challenge for coach Bharat Arun Source: thehindu.com Related

Sachin’s swansong at Lahli ‘inspired’ Shafali to play for India

Five years ago, a starry-eyed Shafali Verma wrestled through a vociferous crowd at the nondescript Lahli ground to get a glimpse of her idol Sachin Tendulkar, the moment that inspired the then 10-year-old to take up the game. On Thursday, the 15-year-old was picked to play for India. It was not just another match, it […]