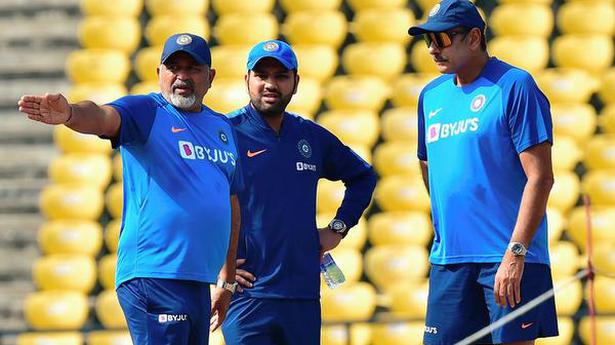 Rohit Sharma seemed to have no quiet moments in Rajkot. During the Bangladesh innings, when India was again sloppy in the field, he cut an animated figure out in the middle, his irritation plain for all to see.

Later, he appeared to take all that annoyance out on Bangladesh, his brutal, unfiltered aggression with the bat a joy to behold. “I wanted to go for six in a row,” he later revealed of his assault on Mossadek Hossain, having clubbed the off-spinner’s first three balls of the evening for six.

Mahmudullah admitted there was little his bowlers could have done to stop Rohit. It was an innings that killed off the second T20I as a contest, delivering India an emphatic win.

What the nature of that victory means is that India will go into the series-deciding third T20I at the VCA Stadium here on Sunday firmly believing it has the upper hand. The momentum has decisively shifted.

As big as Rohit made the gulf between the sides seem on Thursday, India will be aware that it is far from perfect as a team. Khaleel Ahmed has been expensive in both games, and Rohit will have to decide how confident his left-arm seamer is and if he may be trusted to deliver under pressure. Bangladesh will doubtless attack him.

The absence of Jasprit Bumrah makes any Indian side vulnerable at the death. The key to restricting Bangladesh in this situation lies in taking wickets in the middle overs.

Does India have reliable wicket-taking options beyond Yuzvendra Chahal?

Does Rohit feel he can manage four quiet overs between Krunal Pandya and Shivam Dube? These questions remain but this series is an opportunity to look for answers.

The Indian team that will take the field in the opening game of the T20 World Cup next year will most certainly look different — Bumrah, Virat Kohli and Hardik Pandya will come straight in. The T20 Internationals India plays in the lead-up are thus chances for the likes of K.L. Rahul, Shreyas Iyer, Shivam Dube and Deepak Chahar to make an impression.

Rahul started well in Delhi but could not carry on. Shreyas has looked good in both matches, although he fell trying, unselfishly, to raise the tempo in the first T20I.

Washington Sundar pointed out on Thursday that Bangladesh had perhaps felt more comfortable on a slow surface in Delhi than on a good batting track in Rajkot. He expected another batting-friendly surface at the VCA Stadium, confident it would work in India’s favour.

The touring side had the chance to win the series in Rajkot — a result that would have meant a great deal to Bangladesh cricket after the turbulent events of the previous month — but failed.

India perhaps does not see this T20I series as an end in itself, but it will not concede a single inch.

Ben Stokes and the tricky question for analysts

‘Fielding averages’ might soon be a part of a player’s record, but the road is bumpy yet Source: thehindu.com Related

Out-of-favour India batsman Suresh Raina, who underwent a second knee surgery in Amsterdam a couple of days ago, said it was a tough decision to make as he knew it would keep him out of action for a few months. The 32-year-old left-hander had a niggling knee problem since last season and will require at […]

Shafali Verma scored a blistering unbeaten half-century to help India-C register an emphatic eight-wicket victory over India-B and win the T20 Challenger Trophy title on Friday. Chasing 132 in the final played at the Barabati Stadium, opener Shafali smashed 89 from just 45 balls, with 15 fours and 2 sixes, as India-C crossed the line […]