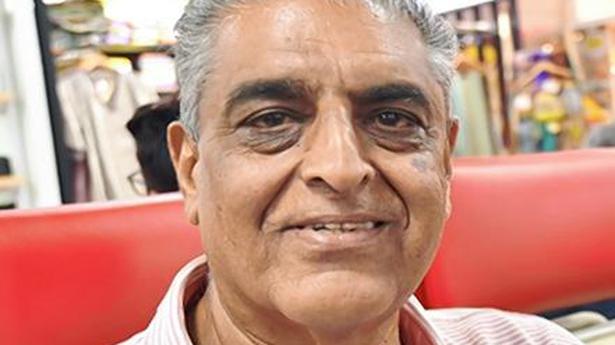 Sanjay Jagdale was elected secretary at the BCCI AGM in September 2011. The outgoing president Shashank Manohar and the incoming president N. Srinivasan backed him. A former First Class cricketer of Madhya Pradesh and a man known for his integrity, Jagdale’s election was welcomed by the cricketing fraternity.

But in less than two years, Jagdale resigned following allegations of malpractices in the IPL and the arrest of Gurunath Meiyappan, a Chennai Super Kings official and son-in-law of the BCCI president.

Talking to The Hindu while watching a Mushtaq Ali Trophy match between Mumbai and Vidarbha at the Holkar Stadium on Monday, Jagdale, now 68, said that the BCCI became a respected organisation because of honest people, it should go back to its members and the game should not suffer. Excerpts:

When you resigned, the BCCI had 29 full members, now there are 36, but it’s actually run by the three-member Committee of Administrators…

It’s very unfortunate. It (implementation of Lodha reforms) is taking a long time. A lot of credit has to be given to people like M.A. Chidambaram, S. Sriraman, Jagmohan Dalmiya and I.S. Bindra for making major contributions to the BCCI.

If this cricket body has become financially sound and runs many tournaments, there must have been some honesty in people. There could be one or two wrongdoings, but one cannot make sweeping charges against the BCCI.

I am not saying everything was good in the BCCI, but a lot of good things were being done in the past and even now.

The BCCI tournaments were being run in a most professional manner. What has happened is very unfortunate, because the State associations are nowhere now.

You talked about honest people in the BCCI. Do you regret having resigned? Many people say it was a knee-jerk reaction and things would have better if you two (Jagdale and treasurer Ajay Shirke) had not quit…

I don’t think there would have been any change even if I had continued. I could not digest whatever happened. I was the secretary, but I was not directly involved with the IPL, there was the Governing Council. I felt that someone needed to take responsibility for what happened.

I became secretary only because of Manohar and Srinivasan. I was never keen, but they persuaded me. I had a very good understanding with Srinivasan, he always supported me for cricket. He gave me a free hand.

You and Shirke quit. Do you think the then BCCI president (N. Srinivasan) should also have resigned and probably the BCCI members would have still been running the daily affairs in a normal manner?

I would not like to comment on this. It was a personal decision, what I thought, I did. It was for the then president to decide. I was not feeling comfortable staying as secretary. As it is, I was never much involved in the IPL which was run in a professional manner.

Then it was the IPL operational rules that were cited to suspend Chennai Super King and Rajasthan Royals for two years?

Absolutely. We had also removed Deccan Chargers and Kochi Tuskers. So the same rule applies to all franchise teams. So morally I thought how can I continue! You cannot have double standards. I never wanted to be part of that decision [to make him part of the BCCI-appointed committee that had two retired judges to probe the Meiyappan case and Royals’ co-owner Raj Kundra].

It’s one of the BCCI office-bearers who recommended to the Lodha Panel to bring the ‘one State, one member, one vote’ rule. Do you think the members could have responded in a more meaningful way to the Supreme Court order?

I actually don’t know what’s happening. I have been out of the BCCI for a long time now. It all depends on the State associations.

More teams in the Ranji Trophy now and other BCCI tournaments…

Top executives of all the full members of the International Cricket Council (ICC) will discuss possible resumption of international cricket and rescheduling two new ICC tournaments — the World Test Championship and the ODI Super League — during a conference call of the Chief Executives’ Committee (CEC) on Thursday. The CEC has been convened with […]

Would love to win a Test series in India, says Steve Smith

Star Australian batsman Steve Smith believes India is one of the toughest places to play Test cricket and winning a five-day format series in the country is a major career goal for him. “I think, as an Australian cricketer, we talk about like Ashes is always big, World Cup is big but now India is […]

Women’s cricket | We need to be smart in how we invest in programmes, says Bates