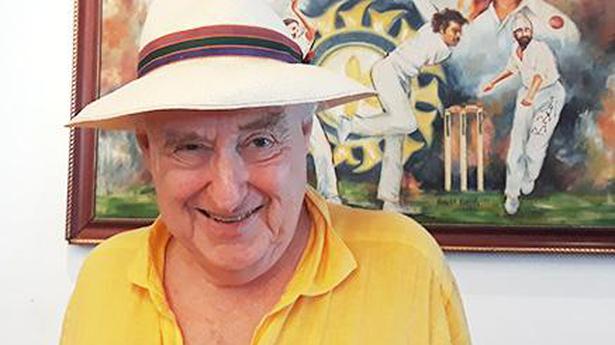 Henry Blofeld carries joy with him wherever he travels. His eyes pick out little things and he flashes a warm smile.

The commentary legend from the iconic Test Match Special on BBC radio looked at the framed picture of the immortal Indian spin quartet and said, “Memorable combination. Erapalli Prasanna was my favourite.”

A BBC documentary had brought the Englishman to Chennai, but Blofeld, stressing the need to embrace cultures, said to The Hindu on Wednesday, “You have to let India come to you.”

A promising wicket-keeper batsman whose career was undone by a bike accident, Blofeld figured in 17 First Class matches before taking first to writing.

“I contributed for The Guardian, The Observer and The Daily Sketch from 1963.”

Along the way, he built lasting bonds. “John Arlott and Brian Johnson, wonderful persons and commentators with unique styles. Among the experts, I found Vic Marks the best to work with.”

Talk to him and he comes up with nuggets. “The third evening of an Old Trafford Test in 1976. In the middle were two English openers, John Edrich who was 39 and Brian Close, 46.”

He added, “And Michael Holding, Andy Roberts and Wayne Daniel were bowling short and quick, hitting both repeatedly on the body. And the umpires did nothing. It was the most frightening evening of Test cricket I have witnessed.”

He has a soft spot for the art of ‘keeping. “Alan Knott was the best. Many considered Bob Taylor better but when I put the question before Ray Illingworth, whom I rate very high, his answer was ‘Knott since he made difficult catches appear easy because of his footwork while Taylor would dive for them.”

Blofeld recalled a friendly game in the Caribbean where he ‘kept wickets and watched the great Everton Weekes, then 44, stepping down to a Sri Lankan off-spinner who was turning the ball big and not once allowing the ball to reach the ‘keeper. “It was a magical exhibition of batting,” he said.

Blofeld’s sense of humour and his way with words endeared him to many. “I liked to paint a picture. Wanted the listener to smile. There is nothing worse than dull commentary.”

Radio commentary is still very popular in England, he said. “It is more descriptive, there are no pauses between deliveries and allows the listener to use his imagination. Talking about adapting to both radio and television commentary, Tony Cozier was the best.”

The Test Blofeld cherished most was the Ashes classic at Headingley in 1981 where Ian Botham and Bob Willis scripted a believe-it-or-not victory for England.

For Blofeld, the journey continues.

It’s my job, that’s what I am here for: Ganguly on first ever day-night Test

BCCI president Sourav Ganguly on Tuesday said the historic decision to organise India’s first-ever Day-Night Test is based on “common sense” as it is the only way to revive falling crowd interest in the traditional format. India’s maiden Day-Night Test against Bangladesh, the second game of a two-match series, will be held at the Eden […]

After a week’s break, Delhi resumes its Ranji Trophy campaign by hosting two-time defending champion Vidarbha at the Ferozeshah Kotla ground in a crucial tie beginning on Sunday. The return of Ishant Sharma and the inclusion of left-arm pacer Kulwant Khejrolia have strengthened the home team in conditions that could assist fast bowling. Vidarbha clearly […]

West Indies coach Phil Simmons said his team’s focus in the match here on Sunday would be on the team-building process that has been set in motion. “We are trying to build something, and the match tomorrow does not influence the direction in which we are going. All the guys know even though we play […]