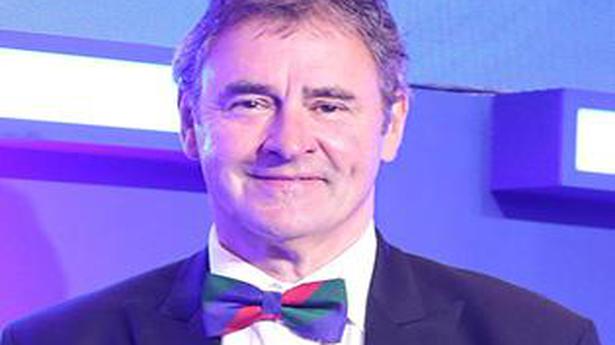 Chris Cowdrey had his own way of being less demonstrative while conducting the VIVO ProKabaddi League Auction 2019 at a South Mumbai five star hotel on Monday.

Picking a card from a bag held by his wife, the former cricketer-turned-auctioneer, Chris was business-like, saying: “Anybody wants to kick me of… I am asking for ten (₹10 lakh), he is going back in once, twice and done”.

The gavel is hit hard on the sound block and this time the little-known player goes unsold.

But Chris had a busy morning session as franchises bid hard for Iran’s Mohammad Esmaeil Nabibakhsh and Abozar Mighani.

Having done the PKL auction for the first time last year, most in the 12 franchises knew who Chris was — son of the celebrated England cricketer and captain, the late Colin Cowdrey. Chris, now 61, played for Kent and made his Test debut against India at the Wankhede Stadium in 1984.

Talking to The Hindu he said: “I do a lot of charity auctions in the UK, mainly children’s.

“This thing is quite new, I did this last year.

“It’s a fantastic new concept to us English people because you are not bidding money for a cause, but actually to buy a player for a franchise. It’s very different and exciting. I watch the game, but it doesn’t make any difference to the auction.

“My job is only to put it out there and see who wants to bid. It’s not for me to say “I think he is a good player. I have done mainly cricket auctions, cricket memorabilia, but nothing like this.”

India Women will have to address its batting woes when it takes on England Women in a crucial league match of the T20 Tri-series here on Friday. A mid-innings slump led to India’s four-wicket defeat in its previous match against Australia. This was after beating England by five wickets in the tournament-opener last week. Except […]

The BCCI’s ACU chief Ajit Singh has ruled out the possibility of any international player being a suspect. “Some players have reported that they received WhatsApp messages from certain unknown people. “We are trying to find out who those people are. We have recorded the statements of the players and will try to track the […]

Priyam Garg to lead India’s U-19 squad against Afghanistan

Mumbai left-hander Yashasvi Jaiswal, who recently hit a double century in the Vijay Hazare Trophy, headlined a strong India U-19 squad that will take on Afghanistan in the first two games of the five-match one day series. The Indian team, led by Priyam Garg, is preparing for next year’s U-19 World Cup and various combinations […]