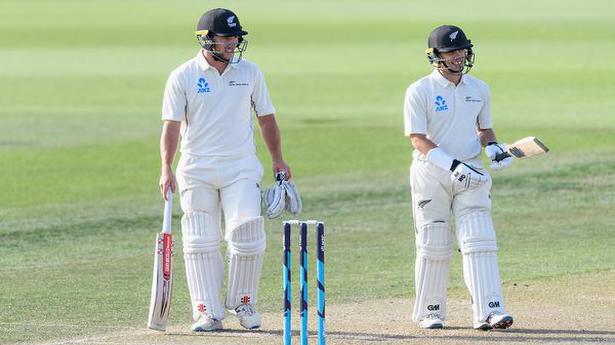 Dane Cleaver smashed an unbeaten century as New Zealand-A put India-A in a tight spot by amassing 385 for five in its first innings on the second day of the first unofficial Test here on Friday.

After Will Young (54) completed his half-century, the host suffered a mini-collapse, losing three wickets cheaply but Cleaver (111 off 194 balls) and Mark Chapman (85 off 187 balls) resurrected the innings, adding an unbeaten 209 runs for the sixth wicket.

Cleaver sent the ball across the fence 16 times, while Chapman smashed eight boundaries in his innings.

At stumps, the duo was at the crease with New Zealand taking an overall lead of 169 runs.

On day one, India-A was all out for 216 in its first innings.

Resuming at 105 for two, overnight batsmen Young (54) and Ajaz Patel (38) added 66 runs before the former was sent back in the 49th over by S Sandeep Warrier.

Young’s 50 was laced with six boundaries, while Patel hit four fours and three sixes in his 66-ball innings.

In the 50th over, Glenn Phillips (4) was trapped in front of the wicket by Shahbaz Nadeem, while one over later Patel was dismissed by Warrier as the Kiwis slipped to 176 for five.

Cleaver and Chapman then joined hands to take the Black Caps closer to the 400-run mark.

For India-A, Sandeep Warrier claimed two wickets, while Mohammed Siraj (one for 104), Ishan Porel (one for 61) and Shahbaz Nadeem (one for 67) accounted for one wicket each.

Siraj confident of successful season ahead

Mohammed Siraj is looking for consistency, keen on becoming a strong contender for a place in the Indian team. The 25-year-old medium-pacer, like many other Hyderabad cricketers, is missing the opportunity of playing in First Class tournaments at the start of the season because of the issues in the HCA. He has been training all […]