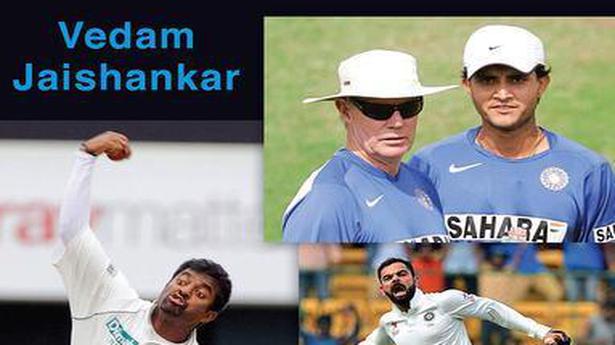 It is a sport that can constrict time or seemingly stretch those minutes. Cricket can be a series of thrilling microseconds, evident in Twenty20s, and it also has long pauses between deliveries or overs, especially in Tests. To unwind a bit during their playing days, Rahul Dravid and V.V.S. Laxman at slips would discuss their kids or the carpentry work in their new homes before snapping back to attention when the bowler commenced his run-up. Cricket offered such indulgences.

(Stay up to date on new book releases, reviews, and more with The Hindu On Books newsletter. Subscribe here.)

The willow game lends itself to drama and often throws up rippling performances. In his book Courage, Conviction, Controversy and Cricket, veteran sports writer Vedam Jaishankar strings together an anthology of incidents that fit into the template of the tome’s nomenclature. In that sense this is a book you need not exactly read in a chronological way.

A random chapter that catches the eye could be delved into and Jaishankar covers a gamut of personalities through his direct style. Known to be opinionated and never one to hold back his punches, the author writes upfront: “Cricket, flush with incidents and personalities, is always an engrossing topic for discussion.”

He then reveals the different layers of this great sport starting with a chapter on Bodyline in which England’s Harold Larwood threatened life and limb in a bid to stymie the great Don Bradman, while England aimed at securing the Ashes. The book’s concluding passages deal with R. Ashwin’s penchant to effect a run-out while the non-striker unfairly sneaked out, and the resultant needless debates.

The book, though, isn’t entirely about stinkers like for instance Trevor Chappell’s under-arm bowling against New Zealand or the match-fixing crisis that sprung two decades ago. Jaishankar also holds a mirror to stirring deeds like former India captain Mansur Ali Khan Pataudi playing with just one eye; Anil Kumble bowling in the West Indies with a broken jaw or a Malcolm Marshall, despite a fractured hand, ambushing England. And as the pages recede, there are references to the Board of Control for Cricket in India.

A quibble or two

It is a book that stays the course of its writer’s ambition: to reflect on cricket’s many facets. May be some paragraphs could have been edited tighter and perhaps Jaishankar could have given credit to Anand Vasu, who broke the story about Paddy Upton’s practical note on sex and cricketers. Anand filed this copy for the Hindustan Times and Jaishankar mentions the publication but not the correspondent. Guess it is the author’s prerogative.

There is also a factual slip wherein former India opener Navjot Singh Sidhu recalls Sachin Tendulkar’s debut series in Pakistan in 1989 and there is his quote: “I thought, oh! only he (Tendulkar) and Kapil are left and after that Kumble…” Just that Kumble made his debut in 1990.

Yet, this a book that offers a wide gaze. Curious about the Greg Chappell-Sourav Ganguly spat or want to know about Yuvraj Singh’s battle with cancer? Pick this one up and read the specific chapter and Jaishankar, with his research, delivers.

ICC Board to discuss contingency plans

The members of the ICC Board will meet via video conference on Friday to discuss contingency plans for its multiple tournaments in the wake of the COVID-19 pandemic. While a couple of ICC Board members confirmed to PTI that no concrete decisions are expected during the conference call, it became imperative that a meeting was […]

Ranji Trophy semifinal | From being a non-entity, Mukesh Kumar rises as hero of Bengal

From being a non-entity in Bengal cricket till six years ago to emerging a hero this season, it has been a rigourous yet rewarding journey for the low-profile pacer Mukesh Kumar, son of a migrant taxi driver from Bihar. Pakistani great Waqar Younis did not find any worth in him when he appeared for trials, […]

There is a feeling in cricketing fraternity that a choc-a-bloc international calender comprising three formats leave youngsters with very little time to work on their game. However the legendary Shane Warne believes otherwise at a time when workload management has been the buzzword in many countries including India. “We played more cricket than this generation. […]