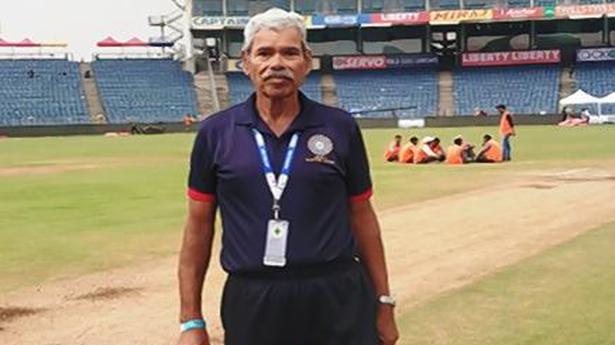 Standing in a drizzle on the 22-yard strip about an hour after India pocketed the second Test and the Freedom Series by annihilating South Africa by an innings and 137 runs, Pandurag Salgaocar was a contented man. In so many ways, life has a come a full circle for the tearaway fast bowler of yesteryear, who was turned into a villain from an unsung hero of Indian cricket.

In February 2017, when the MCA Stadium hosted its debut Test, he came under criticism for producing a sandpit that was rated “poor” by the ICC.

It was followed by the veteran curator facing a suspension after being alleged to have been involved in corrupt activities in a sting operation ahead of India’s ODI against West Indies.

Once the ICC gave him a clean chit after going through the raw footage, Salgaocar was reinstated as the curator and he responded by producing an ideal Test pitch in Indian conditions.

“Cricket has given it all back to me. I have seen a lot over the last two years. They fabricated the videos, doctored my quotes but it hasn’t mattered. Here, I am continuing to serve Maharashtra cricket. That’s what matters,” Salgaocar said.

It may sound emotional, but Salgaocar appeared to be cool and composed.

In fact, he turned philosophical during the brief chat, throwing aphorisms in his typical Marathi dialect as frequently as bouncers in his heyday, one of them famously injuring the legendary Sunil Gavaskar.

“Melelya maansala kaay farak padto? Kudal ghya kinwa koyta ghya (How does it matter if you hit a dead man with an axe or a coyote?),” he says when prompted further on the emotional upheaval in the sting operation, adding: “Lokanna kaahihi bolu de, beduk budato aani pakshi udto (Doesn’t matter what people say. A frog drowns and a bird soars high).”

Having earned rich praise from everyone involved in the game, it’s time for Salgaocar to celebrate his 70th birthday on Tuesday with his head held high.

After Rohit and Rahul’s knocks, Kuldeep spins a web around WI

Wrist spinner Kuldeep Yadav’s hat-trick proved the icing on the cake after openers Rohit Sharma and K.L. Rahul’s brilliant centuries as India scripted a 107-run win against the West Indies in the second ODI at the Dr. YSR-ACA-VDCA Stadium here on Wednesday. Pulling level The victory helped Kohli’s men pull level and take the series […]

Richa — the most complete package

Richa Ghosh is the surprise package in the Indian team for the women’s T20 World Cup. She is also one of the most complete packages. The 16-year-old can bat, keep wickets and bowl medium-pace. “I know it is unusual for a player to be both a ’keeper and bowler, but I don’t want to stop […]