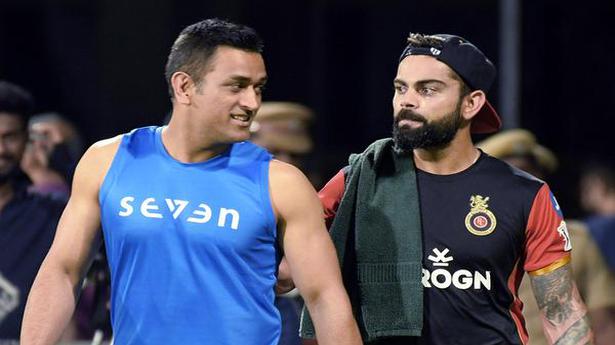 The start of the 12th edition of the IPL couldn’t have asked for a bigger setting than Chennai Super Kings versus Royal Challenger Bangalore, thanks to their captains M.S. Dhoni and Virat Kohli.

However, on history, the rivalry does not hold the same value as the home team holds an overwhelming edge when it comes to head-to-head, leading 15-7 with one no-result from 23 matches.

More importantly, RCB has not won a game since 2014, with the last win coming in their first meeting in the 2014 season. Since then CSK has won six games and Virat Kohli would desperately hope to break the losing streak on Saturday.

And, the skipper led from the front with an intense nets session just hours after landing in the city late afternoon on Thursday and was one of the first few from RCB to have a long stint in the middle.

Mumbai’s Shivam Dube, who was bought for ₹5 crore was seen practising his big hitting while the likes of Parthiv Patel, Milind Kumar and Moeen Ali spent substantial time in the middle.

Among the bowlers, Umesh Yadav, Navdeep Saini, Yuzvendra Chahal and Mohammed Siraj were some of the notable names.

After a day of rest on Wednesday, CSK also had a three-hour session with Ravindra Jadeja having his first training session after arriving in the city on Tuesday.

All-rounder and last year’s star performer Shane Watson also had his first significant hit. Dhoni, who was lethal for CSK during crunch times especially in the final overs last year, spent the longest time in the nets.

England all-rounder David Willey is likely to join the team after the second match while Mitchell Santner, Faf du Plessis and Imran Tahir are expected to arrive on Friday.

With pacer Lungi Ngidi ruled out, the team will need to rely heavily on its local fast bowlers in Deepak Chahar, Mohit Sharma and Shardul Thakur, who all bowled with intensity on Thursday.

However, the advantage of playing at home means CSK would rely more on its spinners to do the job.

Coach Stephen Fleming, on Wednesday, said, “Mitch has a good record in the subcontinent and it’s good to have him. We obviously missed him last year.

“We backed our pace bowlers last year and they made the adjustment to Pune. Imran Tahir is in good form.

“Karn Sharma is also there and Harbhajan has loads of experience — we’ve got most of the bases covered and it’s just about getting the guys to perform and sitting on our gameplan, especially at home,” Fleming added.

A flop show by India batsmen

Hanuma Vihari’s gutsy hundred and the seasoned Cheteshwar Pujara’s 92 were the bright spots in an otherwise dreadful batting performance by India on the first day of their warm-up game against New Zealand XI here. All the three designated openers — Mayank Agarwal (1), Prithvi Shaw (0) and Shubman Gill (0) — failed the seam […]

After rain playing spoilsport in the first ODI of the three-game series in Guyana, India and West Indies have moved to the Queen’s Park Oval for the second game and both teams will be looking to start on the attack after a washed out opening game. Interestingly, Chris Gayle has been ignored for the Test […]

The BCCI on Thursday put out a timeline of Prithvi Shaw’s doping violation case, which showed a gap of more than two months between his sample collection and the final report from National Dope Testing Laboratory (NDTL). In what appeared to be an attempt at damage control after attracting criticism for the manner in which […]