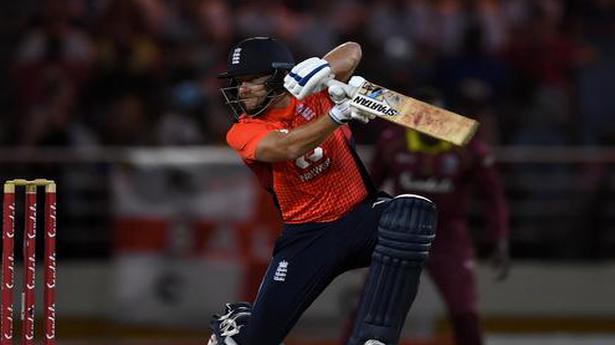 Jonny Bairstow made the most of the absence of a few specialists with a blistering early assault to set England on the way to a four-wicket victory over the West Indies in the first T20 International of a three-match series at the Darren Sammy Stadium here on Tuesday.

Replying to the home team’s total of 161 for eight, Bairstow led the charge at the top of the order with his best T20I score of 68 off 40 balls with two sixes and nine fours.

“A few guys are not playing in this series so it was an opportunity to continue from the one-day series,” said the wicketkeeper-batsman after receiving the man-of-the-match award. “It was great fun because you get to play with a lot of freedom.”

Joe Denly (30) and Sam Billings appeared to have finished the job with a 50-run fifth-wicket stand. However both were dismissed with victory in sight although the target was still easily attained with seven balls to spare.

The West Indies did not aid their cause with a succession of errors in the field throughout their opponents’ innings. Sheldon Cottrell was themost successful bowler with three for 29.

“There were too many extras (conceded),” said captain Jason Holder in reflecting on his team’s loss. “We were a bit scrappy in the field and the wicket was a bit two-paced.”

England will defend the early advantage when the series heads to St. Kitts for the final two matches of the T20 contest and the tour on Friday and Sunday.

Nicholas Pooran’s pyrotechnic half-century had lifted the West Indies to a respectable total as the hosts suffered early setbacks, including big-hitting opener Chris Gayle, after being put in.

Tom Curran was England’s top wicket-taker though with four for 36. He dismissed makeshift opener Shai Hope and then Shimron Hetmyer before returning to york the rampant Pooran in the 18th over. Curran also removed Holder to the final ball of the innings to finish with his best figures in T20Is.

Dropped after his One-Day International debut in the opening fixture of the preceding five-match series, Pooran smashed four sixes and three fours in getting to 58 off 37 deliveries to underline his value in the shortest form of the international game.

Leg-spinner Adil Rashid made amends for dropping Hope on the third man boundary off David Willey in the first over of the match with an excellent effort with the ball, conceding just 15 runs off his four overs and claiming the wicket of Brathwaite.

Even though both teams have secured a playoff berth, there is still a lot to fight for when the top two teams on the points table — Delhi Capitals and Chennai Super Kings clash here at the M.A. Chidambaram Stadium on Wednesday. Despite being the first team to qualify, the home team seems to have […]

The Pakistan Cricket Board has banned Umar Akmal from all forms of the game for three years on corruption charges.“Umar Akmal handed three year ban fr Source: thehindu.com Related

South Africa will travel to India for the three-match one-day series starting on March 12. Cricket South Africa (CSA) on Friday issued a statement to dispel fears that the series may be called off due to the threat from Coronavirus. Chartered flights The CSA stated, “None of the playing venues — Dharamshala, Lucknow and Kolkata […]