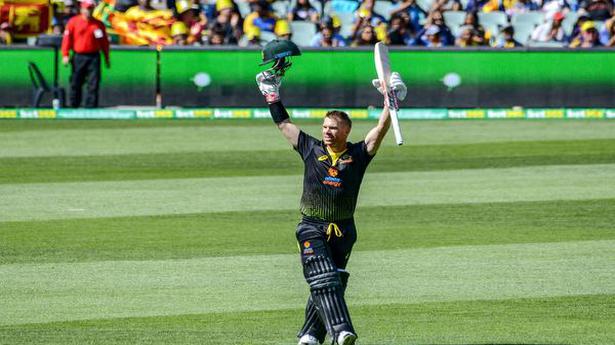 David Warner emphatically bounced back to form with a first-ever Twenty20 century to power Australia to a prolific 233 for two against Sri Lanka in Adelaide on Sunday.

Coming off a dismal Ashes campaign in England and low scores in the new domestic season for his first T20 international since his ball-tampering ban, Warner plundered his unbeaten 100 off 56 balls with four sixes and 10 fours.

The left-handed opener struggled scoring a total of 95 runs in 10 innings for Australia’s Ashes retention, but once he got set he pounded the Sri Lankan bowlers with belligerent hitting and reached his hundred off the last ball of the innings.

His century was complemented by blistering half-centuries from skipper Aaron Finch and Glenn Maxwell as the Australians ripped into the Sri Lankan bowlers, with Kasun Rajitha’s 0-75 off four overs proving the most expensive figures in a T20 international.

“It’s great to come outand play on nicetrue wickets,” Warner said as he left the arena. “Thetone was set by Finchy. I tried to go on and be there at the end. I’d like to think we have enough runs.”

Finch bludgeoned three sixes and eight fours before holing out to Kusal Mendisat deep mid-wicket off left-arm spinner Lakshan Sandakan for 64 off 36 balls. The Aussie skipper shared in a free-hitting opening stand of 122 with Warner and looked in ominous scoring form before he top-edged the leg spinner in the 11th over.

Maxwell showcased his widerange of improvised scoring shot-making skills in his 62 off just 28 balls, studded with three sixes and seven fours. He partnered Warner in a 107-run stand and was dismissed, caught behind off Dasun Shanakain the final over of the innings. It was Australia’s highest T20 total at home since their 221 against England in Sydney in 2007.

Harshal out of IPL

Ahead of its away match against Kolkata Knight Riders at the Eden Gardens here, Delhi Capitals coach Ricky Ponting on Thursday informed that pacer Harshal Patel was ruled out of the tournament due to an injury. Giving details of Harshal’s injury, Ponting said, “He has suffered a fracture in his right hand in the game […]

Pollard buries Kings under an avalanche of sixes

K.L. Rahul converted his third successive 50 into a first IPL hundred. Chris Gayle gave a lesson on how to cut loose after a slow start. But Kieron Pollard marked his maiden IPL game as captain by overshadowing the Kings XI Punjab openers’ efforts to script a memorable win for Mumbai Indians against Kings XI […]