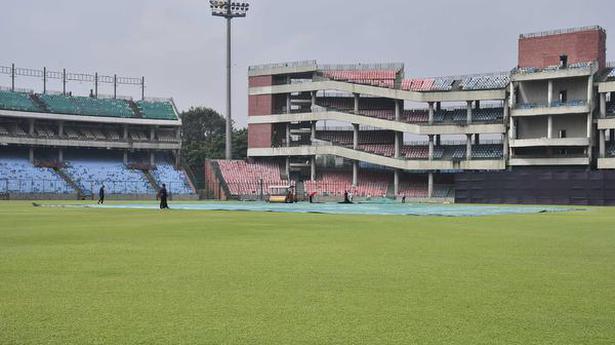 The Delhi and District Cricket Association (DDCA) on Thursday renamed the Feroz Shah Kotla as Arun Jaitley stadium in memory of the late politician-cum-sports-administrator.

A short video and an animation film on Kohli’s journey from being an U-19 player to India captain was also shown.

“When I decided to name a stand in honour of Virat Kohli, I told this first to Arun Jaitleyji. He told me this is a good decision because there is no better player than Virat in world cricket,” said DDCA president Rajat Sharma.

Interestingly, the unveiling ceremony was held at the Weightlifting Hall of the Jawaharlal Nehru Stadium.

“For Arun ji, cricket was his passion and life. He remained DDCA chief for 13 years and he played a great role in making the likes of Virat, Pant, Dhawan, Nehra, Sehwag as great players. All these players love him very much,” Mr. Sharma said.

India’s 1983 World Cup winning captain Kapil Dev said: “Wonderful to have a stand in name of Virat. And whatever DDCA does for Arun Jaitley is not enough given his contribution.”

“Arun Jaitleyji was president for 14 years and I was vice president. He was our friend, guide. Whenever we needed direction, we would help us. The biggest help he did was to rebuilt the Kotla stadium. So befitting to name it in his honour,” Mr. Chauhan said.

Venkat was all style, grace and ruthlessness

He is picture perfect with his bowling action when you scan through old photographs. His long mane flowing back, him classically side-on with the pivot and the hip-drive, and the ball, with serious revs, leaving his supple fingers in a manner that is timeless. Srinivas Venkatraghavan was an amalgam of style and grace, impeccable but […]

Jasprit Bumrah’s situational awareness is unmatched and his five-wicket haul in the second innings of the opening Test against the West Indies is one of the “best spells of fast bowling” by an Indian, feels the team’s bowling coach Bharath Arun. Bumrah, who was given a month’s break after the World Cup, looked rusty in […]

We are all in deep shock, says Tamim Iqbal

The Bangladesh cricket team is still reeling from the shock of a narrow escape in Christchurch where gunmen opened fire, killing 49 people in Masjid Al Noor on Friday afternoon. Hours later, Tamim Iqbal was lost for words. The Bangladesh batsman, who had visited the mosque with his teammates, could not believe he had just […]