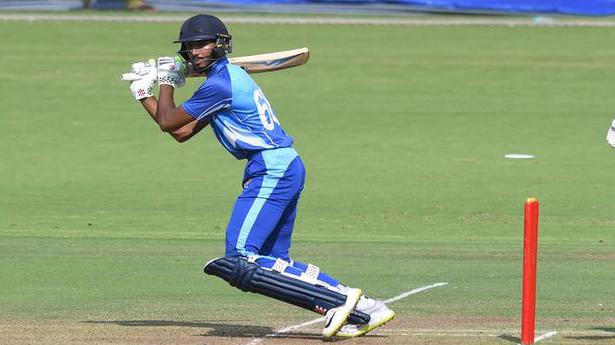 The home side chased down the target at a canter, with more than 15 overs to spare.

Karnataka will play the topper from the Plate group in the first quarterfinal on Sunday.

Defending champion Mumbai, meanwhile, stayed alive in the tournament with a 38-run defeat of Jharkhand. Placed fifth with 20 points, its progress will depend on the last round of matches on Thursday where Delhi (18) takes on Himachal and Uttar Pradesh (20) meets Haryana.

But part-timer Siddhesh Lad broke the partnership, having Tiwary caught at point by Shams Mulani. Speedster Dhawal Kulkarni (5/37) cleaned up the rest, including centurion Virat, as he completed 200 List-A wickets.

I pace my innings according to the situation: Shai Hope

Shai Hope, one of the centurions along with Shimron Hetmyer in the first ODI for West Indies in Chennai, says his role is to hold one end up and step up the pace of the game whenever the team requires. The in-form top-order batsman, who is the third highest run-getter in ODIs in 2019 behind […]