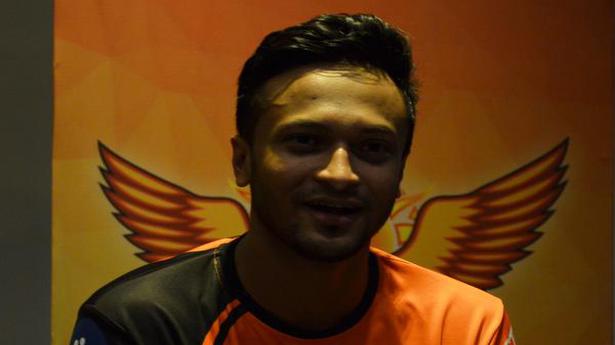 Bangladesh all-rounder Shakib Al Hasan could relate to Mahendra Singh Dhoni’s recent outburst at the umpire during an IPL encounter as he was in former India captain’s shoes exactly 13 months back during an international T20 encounter against Sri Lanka.

In a rare public show of anger, Dhoni breached the Players’ Code of Conduct entering the field of play to challenge one of the umpires Ulhas Gandhe after he signalled no-ball only to backtrack at the insistence of square leg umpire Bruce Oxenford. Dhoni was let off with a light penalty of 50% match fees.

“I did the same thing in Nidahas Trophy. I can’t make any comments on that,” Sunrisers Hyderabad’s Shakib told reporters on the eve of their next game against Delhi Capitals on Sunday.

He was referring to a Nidahas Trophy encounter against Sri Lanka where a no-ball decision had irked him and he wanted his players to pull-out before changing his mind. Once the match was over, there was an ugly altercation between players of the both teams and dressing rooms were damaged.

“It happened at the heat of the moment and it shows how passionate you are as a cricketer. How much you want to win for your team,” Shakib tried to rationalise Dhoni’s behaviour which was certainly out of line.

Hyderabad’s performance has been patchy this year and Shakib pointed that there are areas of concern in all three departments.

“We have not been as good at the death as earlier years. We have conceded a lot of runs in the final three overs. We have the quality and we are working to minimise the damage. Also the middle-order has not fired but there is a lot of talent and we can inflict a damage on the opposition,” said Shakib.

On personal front, Shakib is disappointed that he is not playing but he admitted that all the four overseas players (David Warner, Jonny Bairstow, Rashid Khan and Mohammed Nabi) have performed.

“All the overseas players are doing really well. It is disappointing but you need to understand the situation. Very difficult for team management. I need to remain fit and be ready. Also World Cup is coming up and so there is lot of motivation and when my turn comes I grab it with both hands. I have been training more than I used to do earlier,” said Shakib.

David Warner has been brilliant and Shakib said they never felt that he was away.

“He is a great ambassador for the Sunrisers. It’s not easy to come back after a year and it shows how strong he is mentally. We never felt he was away. Last year, he kept in touch with us and encouraged us throughout,” said Shakib.

England’s pacemen made early inroads to remove Australia’s top three and restrict the tourists to 83-3 in the opening session of the first Ashes test at a raucous Edgbaston on Thursday. Veteran pairing of James Anderson and Stuart Broad bowled well from the off, with Broad removing David Warner in the fourth over for just […]

Recent loses to Karnataka not a concern for Vijay Shankar

Vijay Shankar was not overly concerned by Tamil Nadu’s defeats to Karnataka in the final of the Vijay Hazare and Syed Mushtaq Ali tournaments this season. The Tamil Nadu captain said, “It’s a completely different format and it is a new game. Whatever happened is done and dusted.” About meeting Karnataka Vijay Shankar said, “The […]