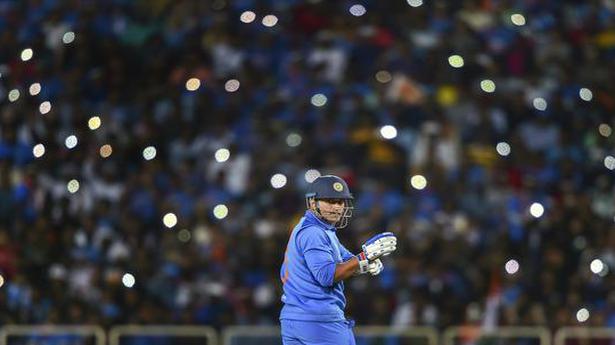 India’s seniormost player Mahendra Singh Dhoni will be “rested” for the final two ODIs of the ongoing series against Australia and Friday’s match here could well be his last international outing on home soil.

With India not having any home matches till October, the match here could well be the last time that Dhoni has played in India Blues on home soil.

The World Cup is widely believed to be Dhoni’s swansong in India colours.

However, the Jharkhand State Cricket Association believes that they would get one limited overs match during the next home season where Dhoni could bid a proper farewell.

Knowing Dhoni’s allergy to publicity, the chances of that happening is pretty dim at the moment.

Rishabh Pant will keep wickets during the last two ODIs in Mohali and New Delhi.

India pacer Mohammed Shami will also be not available for the next match due to a leg injury.

Match No. 200 for the CSK skipper Source: thehindu.com Related

Started sample collection of IPL players in the UAE: NADA

It is understood that NADA’s own Dope Control Officers (DCOs), who were due to fly to the UAE in the second week of September, are awaiting for necessary approval for the trip. Source: thehindu.com Related