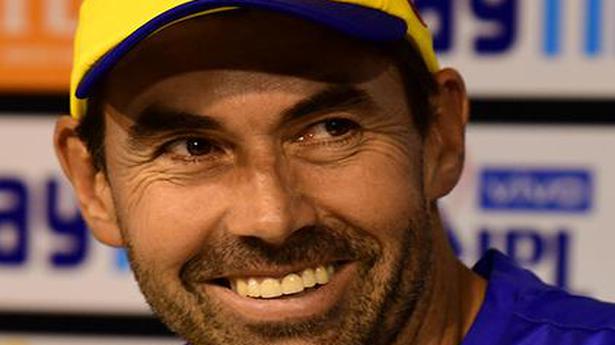 Shortly after Chennai Super Kings came up with another Houdini act and pulled off a stunning victory over Rajasthan Royals, coach Stephen Fleming admitted that captain M.S. Dhoni would be asked questions about his unusual act of entering the ground to argue with the umpires.

Fleming said it was the confusion that prompted Dhoni to go up to the umpires.

“We saw a no-ball being called by the umpire at the bowlers’ end… and then there was confusion about whether it was a no-ball or not,” he said. “MS asked for clarity, which didn’t seem to be coming. He took the opportunity to discuss it with the umpires.”

He said Dhoni had been fired up by the incident, but paid tribute to the man who won his 100th IPL match as captain.

“Hundred wins is great,” he said. “Dhoni as captain is very successful. Dhoni as player is outstanding. Both are closely related. He played incredibly well today.”

Fleming said the team had high regard for Mitchell Santner, who hit that sensational six off the last ball.

“We decided to play him because we wanted a combination close to the one we had in the last match against Rajasthan as they have a lot of right-handers,” he said. “Harjbhajan did not play because he had a sore neck.”

The coach, however, said there were areas of concern for CSK.

“Losing four wickets for 20-odd runs will not win many games and we have to ensure the confidence of our top-order is high as they have had to bat on the tough wicket in Chennai,” he said.

“We need to work on our death overs and fielding, too. We know we have a number of holes but we are trying to cover them as much as we can.”

Tough to take for Royals

Earlier, Rajasthan Royals opener Jos Buttler admitted the loss was a tough one to take.

“The boys are getting in a good position, but are not able to get over the line,” he said. “The boys will be disappointed, but I think that has been the story of the season so far.”

On the Dhoni incident, Buttler said it wasn’t probably right.

“I was on the boundary and wasn’t aware of what was going on,” he said. “I am not sure if that was the right thing to do.”

Injuries to key players has opened the door for exciting youngsters such as Prithvi Shaw to make an impression in the Indian line-up against a low-on-confidence and depleted New Zealand in the three-match ODI series starting here on Wednesday. This is India’s third ODI assignment after the World Cup last year, having previously beaten West […]

Ashwin puts up a fight, but Tamil Nadu on the back foot

Tamil Nadu produced a poor display with the bat and found itself on the back foot after being shot out for just 96, in reply to Himachal Pradesh’s first innings score of 158 in the Group B Ranji Trophy clash here at the NPR College grounds on Wednesday. At stumps on day two, Himachal was […]

Ranji Trophy | TN, Himachal look to get back on track

Both Tamil Nadu and Himachal Pradesh will look to get their Ranji Trophy campaign back on track when the two teams face off at the NPR College grounds here on Tuesday. Tamil Nadu lost to Karnataka while HP went down to Saurashtra in their season openers last week. Tamil Nadu lost a close match here […]