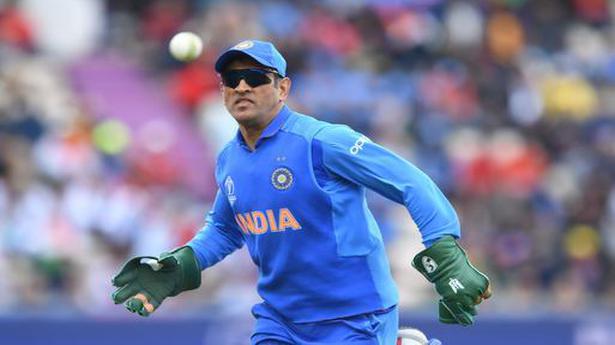 M.S. Dhoni sporting an Army insignia on his glove during the India-South Africa clash was well appreciated by his fans but the International Cricket Council on Thursday requested the BCCI to have the badge removed, saying it is against regulations.

Claire Furlong, ICC general manager – strategic communications, said, “It is against the regulations and we have requested it to be removed.”

When asked if Dhoni, who is an Honorary Lieutenant Colonel in the Parachute Regiment of the Territorial Army, could be penalised, she added: “For first breach no, just a request to remove”.

Dhoni’s love for the Indian Army is well known. During the opening World Cup fixture against South Africa in Southampton on Wednesday, Dhoni’s gloves attracted special attention when the TV cameras zoomed in.

The regimental dagger insignia of the para forces was embossed on his green wicket-keeping gloves.

While there is a possibility that Dhoni may have worn these gloves with the dagger insignia earlier also, it did get a lot of traction on social media with fans loving his unique way of paying tribute to the armed forces

‘WC selection thoughts were on my mind’: Rishabh Pant

Rishabh Pant’s omission from India’s World Cup squad has been one of the major talking points for a week. On Monday night, the explosive left-handed batsman showed why. His unbeaten 78 off 36 balls against Rajasthan Royals underlined his value as a match-winner and finisher. Though he had made an identical score in Delhi Capitals’ […]

Innings win for Andhra over Hyderabad

Andhra scored an innings and 96-run win over Hyderabad in the Ranji Trophy Elite group match at the C.S.R. Sarma College ground here on Tuesday. It was Hyderabad’s fourth defeat in five games and it has just six points now, thanks to the solitary win over Kerala. Resuming at 45 for three after conceding a […]