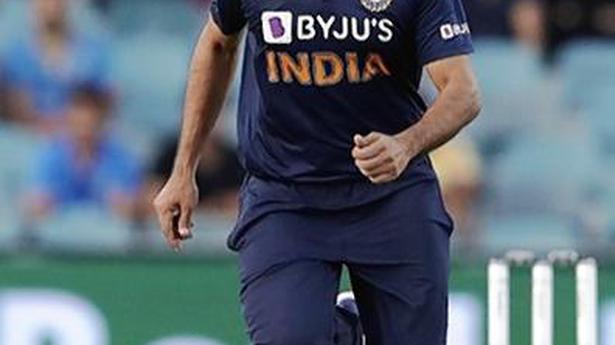 Shardul Thakur, who played a key role in India’s win in the third ODI against Australia on Wednesday, said he was thrilled to see the back of Steve Smith early.

“For Smith, we had planned to bowl at the stumps. We were lucky as he edged behind on the leg-side. He’s a top player and getting him early on in the innings while defending 302 was a big moment,” said Shardul, who finished with three wickets, at a virtual media interaction.

About his gameplan, he said, “The Australian batsmen had played the cut and pull shots a lot in the first two games. I just tried to keep them off those shots and make them play straighter. That worked.”

Shardul said David Warner’s absence was felt by Australia. “We thought we could take advantage of his absence and put Australia on the backfoot.”

Shardul was all praise for the bowling of debutant and fellow seamer T. Natarajan, who took two wickets. “In white-ball cricket, you are going to get hit as a bowler, but what is important is to come back, bowl again.”

Loss will be around half a billion dollars, says treasurer Dhumal Source: thehindu.com Related

I don’t know where these things come from: Sakshi on Dhoni’s retirement rumours

“We of course miss CSK, still wondering whether IPL going to happen or not. My daughter also asking ‘when it will happen?’ Let’s see…” Source: thehindu.com Related