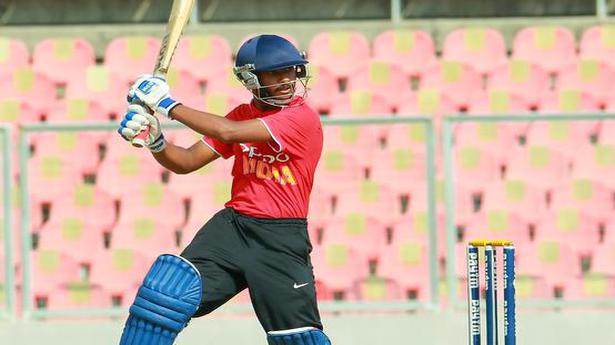 India-A suffered a batting collapse and ended up with a much lesser total than it promised. However, the spinners ensured it was more than enough against Afghanistan, which lost by 92 runs in the Quadrangular Under-19 one-day series at the Sports Hub here on Thursday.

India-A, with its second win, ensured its place in the final while it was second consecutive loss for Afghanistan in the tournament.

Chasing 253 for a win, Afghanistan was never in the hunt after Ishan Afridi castled opener Riaz Hussain for a duck in the third over. The loss of wickets at regular intervals derailed the chase with the 44-run sixth wicket stand between Arif Khan (33) and Shafiquallah Ghafari (28) providing the only real resistance. Medium pacers Ishan Afridi and Akash Singh dealt the early blows and the spinners piled on the pressure with their parsimonious spells.

Harsh Dubey and Ravi Bishnoi were unrelenting and kept the batsmen on tight lease during the middle overs. The run rate crept up and Afghanistani batsmen perished while trying to force the pace. Left arm spinner Yuvraj Chaudhary (three for 24) and off spinner Siddhesh Veer (two for 11) profited from the batsmen’s haste as Afghanistan was dismissed in the 49th over.

In the morning, India-A lost eight wickets for 100 runs as Afghanistan spinners led by leg-spinner Shafiqullah Ghafari (four for 35) brought their side back in contention. India-A collapsed from a comfortable position of 152 for two in the 27th over to 252 all out in the 48th over.

After the early loss of Qamaran Iqbal (5), Veer (81), who replaced Yashasvi Jaiswal, and Priyansh Arya (44) added 98 runs for the second wicket to set the platform for a big score.

However, Shafiquallah foxed the Indian batsmen with an assortment of leg breaks and flippers to put the innings in disarray. Shafiquallah started the rot when he had a well settled Priyansh Arya edging a catch to wicketkeeper Ishaq Zazai. After Veer holed out in the deep, India lost wickets far too regularly and ended up with a much lesser total.

NZ vs IND T20I: We need everyone to be the best version of themselves, says Kohli

India captain Virat Kohli on Sunday said he wants his players to be the “best version of themselves” in order to dominate world cricket in the coming years. India notched up a rare 5-0 whitewash over New Zealand with a seven-run win in the fifth and final T20 International in Mount Maunganui.   “We need […]

Different possibilities are being worked out for the T20 World to go ahead, says the board’s interim CEO Nick Hockley Source: thehindu.com Related

In keeping with his gift for timing when batting, Virender Sehwag drew a parallel between safety in cricket and road safety. The opener was responding to questions after an entertaining 74 not out for India Legends against West Indies Legends. He used the pace off the Wankhede track, was in his comfort zone when rocking […]