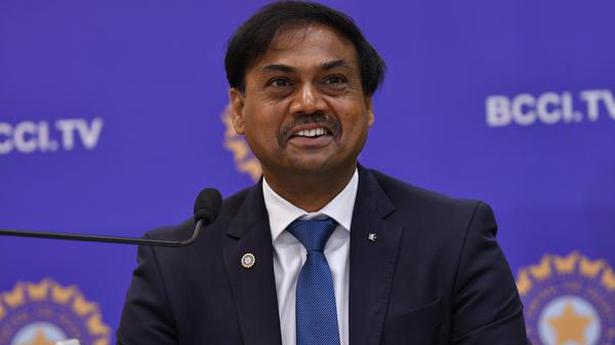 Ever since Sourav Ganguly was announced as president-elect of the Board of Control for Cricket in India (BCCI), murmurs of a rejig in the national selection committee have been doing the rounds. A day after Ganguly’s coronation was formalised, chief selector M.S.K. Prasad hinted that the future was uncertain for him and all his four colleagues.

Besides selecting India’s squads for the T20Is and Tests against Bangladesh, Prasad and his four colleagues — Gagan Khoda, Sarandeep Singh, Devang Gandhi and Jatin Paranjpe — had a meeting with Ganguly at the BCCI headquarters.

During his media interaction, when Prasad was asked if Thursday’s was the last selection meeting of his committee and what would be the legacy of his committee, the former wicket-keeper responded: “This selection committee can proudly say that we have left enough bench-strength in all the departments across all formats.”

The Hindu understands that the new BCCI dispensation is keen on tweaking the under-fire selection panel. It is possible that three of the five selectors, including Prasad, may be asked to step down after due processes are followed. However, the selection committee revamp may take more than a month.

According to BCCI’s new rulebook, the new office-bearer will have to call an AGM with a 21-day notice. The AGM has to appoint the Cricket Advisory Committee (CAC), which will then invite applications for selectors and conduct interviews before shortlisting candidates.

Two of the five selectors — Prasad and Khoda — have served four years as selectors, while the remaining three have been working for three years. According to the revised rules, no individual can be a part of all cricket committees — senior selection committee is one of the eight cricket committees — for more than five years.

Despite the national team’s consistent performances across formats, the lack of stature of the committee — with a combined 13 Test caps — has been criticised by legends, including former captain Sunil Gavaskar.

Known for his swashbuckling batting style, wicketkeeper-batsman Rishabh Pant says the one thing that scares him is the anger of India skipper Virat Kohli. “I am not scared of anyone but Virat bhaiya ke gusse se dar lagta hai (I’m scared of Virat Kohli’s anger),” Pant said in a video posted by his IPL team, […]