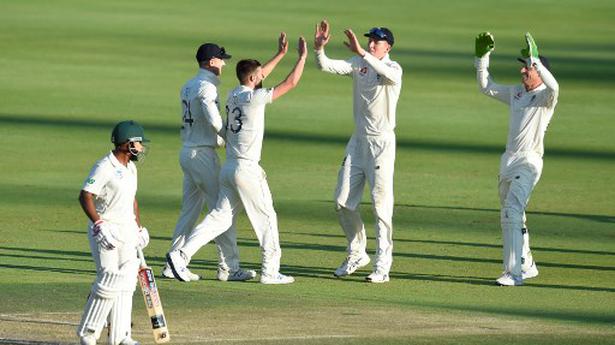 Mark Wood starred as England took a huge stride towards securing a series win when it dominated the second day of the fourth and final Test against South Africa at the Wanderers Stadium on Saturday. England posted a first innings total of 400 before reducing South Africa to 88 for six by the close.

Two century partnerships and a boisterous last-wicket stand of 82 took England to a total which almost certainly put the match beyond South Africa.

Then it was the turn of the bowlers, led by Wood, as England pushed for a third successive win in a series which it leads 2-1.

The host finished the day still 312 runs behind, with Quinton de Kock its only consistent batsman during the series, seeking to give the innings some respectability on Sunday.

Wood made the first breakthrough when he had Pieter Malan caught behind for 15. He followed up with the wicket of the recalled Temba Bavuma, then finished the day on a high when nightwatchman Anrich Nortje was caught at gully in the last over of the day. He had figures of three for 21.

Sam Curran, Ben Stokes and Chris Woakes picked up a wicket each.

Sports Minister Kiren Rijiju on Saturday welcomed BCCI’s decision to come under the ambit of National Anti-Doping Agency (NADA), terming it a major step towards clean and transparent governance in sports. Having stalled the ministry’s near decade long attempts to bring BCCI under the NADA fold, the Board finally relented on Friday, a move that […]

New Zealand is the latest country, after the UAE and Sri Lanka, which has offered to host the IPL in case the billion dollar league can’t be held in I Source: thehindu.com Related

Indian pacer Deepak Chahar says that bowling with a white ball is always a bigger challenge irrespective of whether bowling first or second in any condition. “Definitely, we should have defended the total in Chennai. It was a par score. We didn’t bowl well there and fielded badly too,” he told the media here on […]