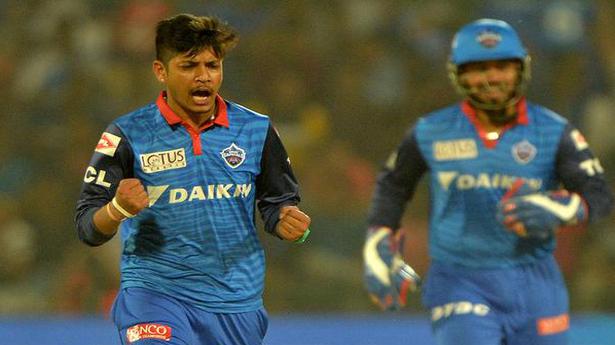 Sandeep Lamichhane played a big role in Delhi Capitals’ five-wicket win against Kings XI Punjab on Saturday and the 18-year old leg-spinner was visibly proud of his efforts after the game.

“I think it was the turning point. Chris Gayle was looking in good form. Anywhere we were bowling, he was smashing us all over the ground (so) getting those two wickets in the 13th over was really good for us,” Lamichhane admitted. He sent back Gayle and Sam Curran to put the brakes on the KXIP scoring and restrict it to an achievable total.

However, he denied he had anything to prove to anyone after being dropped for the previous game. “I never take any challenge as an opportunity, but take every opportunity as a challenge so that I can prove myself and give a reason to smile for everyone.

“At the end of the day you need good results and I think our coach has got much more knowledge than me. I just relax, learning all the things and where I can groom my cricket.

“Last time I played three games, this time I’ve to play a lot more. That’s where I can improve myself, so if this time I’m getting seven to eight games, I would like to make sure, next time, I will play all 14,” he laughed.

He admitted dew played a big role in the result and KXIP coach Mike Hesson concurred. “I think 163 was a good score batting first. Obviously, dew was going to be a factor and that was considered at the toss by both sides. The way Shikhar (Dhawan) and Shreyas (Iyer) batted, they played low-risk cricket, and they played very well,” Hesson said.

While admitting that the score was lower than what Punjab might have hoped for when Gayle was batting, Hesson said he was proud of his team nevertheless. “I think Chris is unique in terms of the power he has got — he was one guy who could have taken the game away from the opposition.

“We also kept losing wickets which made it difficult to push on. That’s why the last partnership between Ashwin and Harpreet Brar was very important for us. I’m pretty proud of the way we hung in there; it was a good effort,” Hesson said.

NZ vs IND second Test | A shake-up can be a good thing, says Ravi Shastri

As an opening batsman, Ravi Shastri relished pushing deliveries down the ground. He played the percentage game, batted straight. And, as coach, Shastri is someone who talks straight. No roundabout answers. He gets to the point quickly, does not go into denial mode.   Asked about India’s inability to make short work of the tail, […]

India-A suffered a batting collapse and ended up with a much lesser total than it promised. However, the spinners ensured it was more than enough against Afghanistan, which lost by 92 runs in the Quadrangular Under-19 one-day series at the Sports Hub here on Thursday. India-A, with its second win, ensured its place in the […]

Spot-fixing scandal: Afridi claims he knew of SMS exchanges between players and bookmakers

Former Pakistan captain Shahid Afridi has claimed that he was aware of the exchange of messages between his teammates and a bookmaker before the 2010 spot-fixing scandal but then coach Waqar Younis refused to act despite being provided with evidence. Making another startling revelation in his autobiography ‘Game Changer’, Afridi said he stumbled upon a […]