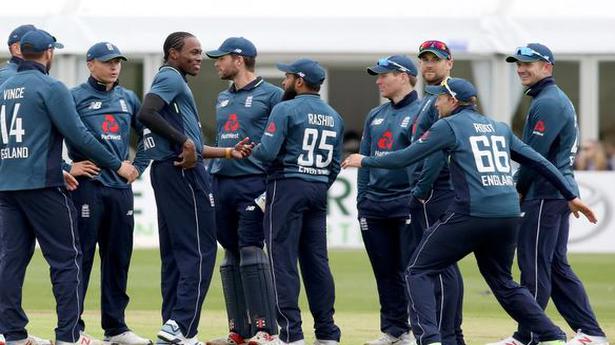 Ben Foakes’ unbeaten 61 on his debut helped England recover from a top-order collapse to beat Ireland by four wickets in a lone one-day international in Dublin on Friday.

England, the world’s top-ranked side in ODI cricket and the hosts of the 50-over World Cup starting later this month, collapsed to 66 for five chasing a modest 199 for victory.

They were still in trouble in a match at Malahide reduced to 45 overs per side by a wet outfield when teenage debutant left-arm quick Josh Little took his fourth wicket.

But wicket-keeper Foakes and Surrey team-mate Tom Curran (47 not out) saw England home with an unbroken stand of 98 as the visitors won with three overs to spare.

Victory in their opening match of the season saw England avoid the embarrassment of a fresh defeat by a side controversially excluded from an upcoming World Cup now reduced to 10 teams following their shock loss away to Scotland last year.

And for Ireland this result meant they did not enjoy another win over England to set alongside their triumph at the 2011 World Cup.

Things might have been different had Foakes, on 37, not survived a tight lbw appeal from veteran Ireland paceman Tim Murtagh.

But Ireland opted against a review, with replays suggesting the ball may have gone on to hit leg stump.

England were without two experienced top-order batsmen in the injured Jason Roy and the axed Alex Hales, sent into international exile after reportedly failing a second test for recreational drug use.

When Vince (18) pulled Little to mid-wicket, England were 34 for one.

Little struck again when he dismissed Eoin Morgan for a duck after the Dublin-born England captain could only fend a brilliant bouncer behind to Gary Wilson.

Wicket-keeper Wilson, in his 100th match at this level, then held an even better catch — a diving one-handed grab high to his left — as Malan (24) slashed at Little.

David Willey helped staunch the flow of wickets before he holed out to long log off Little, who finished with fine figures of four for 45

Earlier, Liam Plunkett took four for 35 in an Ireland innings where paceman Jofra Archer marked his England debut with a wicket.

Barbados-born Archer, whose first ball in international cricket was hit for four by Paul Stirling, produced a 90.3mph yorker to bowl Mark Adair.

Ireland openers William Porterfield and Stirling put on 55 for the first wicket.

But when Archer held a diving catch at mid-on off Curran to dismiss Stirling for 33, it was the start of a slump that saw Ireland decline to 77 for four.

The Committee of Administrators (CoA) has appointed a three-member Independent Supervisory Committee to run the cricketing affairs of Bihar Cricket Association (BCA) and also conduct fresh elections. The CoA, chaired by Vinod Rai, took the decision after deliberating on the issue during a meeting in Mumbai on Friday. “For the proper running of the game […]

Sri Lanka embarked on the first Test cricket tour of Pakistan in 10 years on Monday following the deadly 2009 attack on its team that plunged Pakistan into sporting isolation. Touchdown Islamabad, tweeted the Pakistan Cricket Board, along with a video of the players at the airport, while PCB chief executive Waseem Khan called their […]