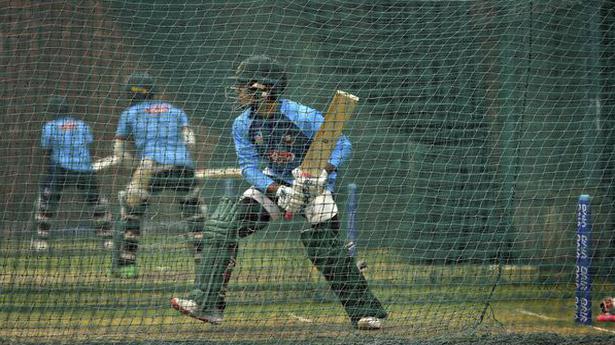 For over two hours, Bangladesh cricketers practiced at the Arun Jaitley stadium in New Delhi on Thursday afternoon ahead of the November 3 opener of the three-match T20 series against India on Sunday.

A day after landing in New Delhi, where the air quality continues to worsen, the cricketers had a ‘feel’ of the venue. Dashing wicketkeeper batsman Liton Das, who briefly sported a mask, told the waiting mediapersons that the team was not thinking about air quality.

“Briefly, I was not feeling good so I wore a mask. Everything else is good. At present, the team was focussing on performing well in the T20 series,” he said in Bengali.

The days leading up this tour has been tough for Bangladesh cricket. The recent players’ strike threatened the tour. Earlier this week, skipper Shakib Al Hasan was found guilty by the ICC’s Anti Corruption Tribunal.

As a result, the mental preparedness of this young Bangladesh team on the eve of the series could be questioned. But Liton Das was categorical as he expressed his views with the help of an interpreter.

“We’ve had a reasonably good preparation before coming here. We had a camp back home. It is a good opportunity for the players to adapt. Regarding Shakib, the best player in our team, we are doing to miss his services. It must also be remembered that there have been times when he was not available because of injury.”

India, ranked fifth in the ICC T20 rankings holds an 8-0 record against the ninth-placed Bangladesh in the shortest format of the game. “India was lucky to win every time (in some close games),” said Liton Das and added, “We always try our best.”

Responding to another question, the Bangladesh player said, “If you look at our team, most of us are new comers. The team looks forward to young players to play their natural game and contribute. It is not seen as the responsibility of only the seniors to perform. This is the realization within the team that contributions have to come from across the board.”

The members of the Indian team, under Rohit Sharma, are scheduled to practice on Friday afternoon, after the visiting team’s ‘nets’ that commences in the forenoon.

Batsmen have to execute the roles assigned to them: Rohit

It is among the most dominant outfits in world cricket in longer formats, but when it comes to the shortest avatar, the Men in Blue have been consistently inconsistent. One of the major issues to have plagued Virat Kohli and Co. in the last 12 months is the inability to win while batting first. As […]

Guruprasad bowled over by Tendulkar

Forty-five-year-old S. Guruprasad, leading a simple life here, never imagined in his wildest dreams that an incident that he had almost forgotten would bring him into the limelight. On Friday evening, he received a call from his nephew in France saying that Sachin Tendulkar had tweeted that he would like to meet the staffer at […]