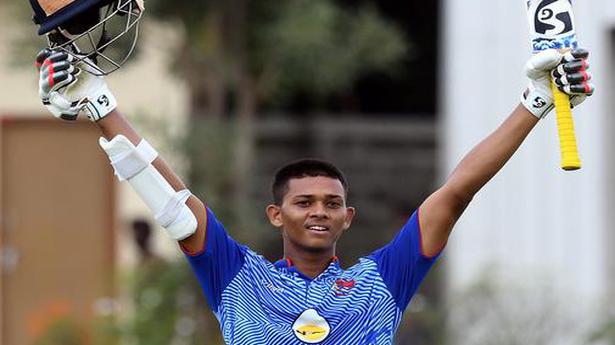 Yashasvi Jaiswal couldn’t appear for the Class X exams two days ago, busy as he was dismantling a hapless Kerala attack in the Vijay Hazare Trophy en route to his second List-A century. On Wednesday, the 17-year-old went one step further, smashing a spectacular double century (203, 154b, 17×4, 12×6) in Mumbai’s 38-run victory over Jharkhand and becoming the youngest-ever to score a double hundred in List-A cricket.

Did he have any regret about missing the exams, Jaiswal was asked. “No. For me, cricket is everything,” he replied. In fact, not until the match finished did he even realise that he had broken a record that had stood for close to 45 years (South African Alan Barrow, aged 20, had scored an unbeaten 202 for provincial side Natal in 1975).

It was perhaps reflective of the way he batted: pure, clutter-free hitting unmindful of pressures that accompany a must-win game. “I didn’t think much. Just played on the merit of the ball and it happened. Even I didn’t realise that it had happened. But it is just the start. God willing, I will continue to play well and work harder.”

However, six years ago, Jaiswal would have had little inkling of the things to come. After moving to Mumbai from Uttar Pradesh, he didn’t have a place to stay and had to resort to selling savouries on the street to make ends meet.

“It made me mentally strong,” the southpaw said. “Now if I am in a tough situation, I am confident of doing well. I don’t pay the results much attention. Whatever is in my control I will do. The struggle is there even now and it will be there always. I just play with a lot of heart and I will continue to do so.”

Jwala Singh, a local coach who took Jaiswal under his wing, was a “god-like figure”, he revealed. As far as cricketing idols went, Sachin Tendulkar and Wasim Jaffer rank the highest. The latter, whose autograph is prominently visible on his bat, has been instrumental in him learning to construct long innings, the kind of which he played against Jharkhand. It was also paced to perfection, with the first 100 taking 101 balls and the second just 49.

“I was with Wasim sir in the Vizzy Trophy where I was the man-of-the-series and he gave me a lot of tips because of which I am able to play long innings. I speak to him before matches and he guides me a lot.”

“They say Mumbai batsmen are ‘khadoos’ and won’t give away their wickets easily. Even I think like that. I won’t give up my wicket easily. The bowlers should get me out.” If the past week is anything to go by, the bowlers have a lot to figure out.

Jammu and Kashmir cricketers, who could not train for the upcoming domestic season due to the communication clampdown in the region, have finally managed to get together and will begin their training in Baroda from Thursday. The Jammu and Kashmir Cricket Association (JKCA) had last week put out advertisements on local TV channels to get […]

New Zealand’s first innings record 715 for six, including a double century by skipper Kane Williamson, put it in total control of the first Test against Bangladesh after three days on Saturday. New Zealand breached the 700 barrier for the first time on its way to building a 481-run lead and was six wickets away […]