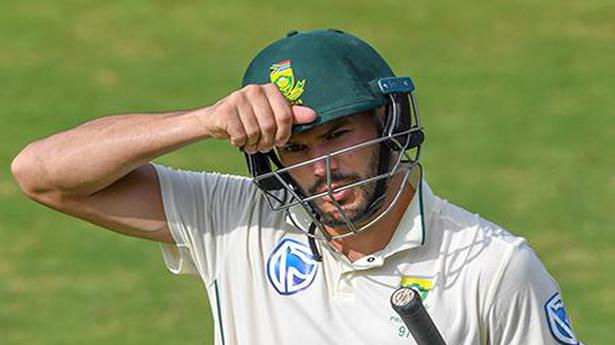 Aiden Markram has been ruled out of the third Test after injuring his wrist while punching an object in frustration during the second match in Pune.

The South African opener hurt himself after lashing out following his dismissal in the second innings, when he was adjudged lbw for nought. Replays showed that the ball would have missed the stumps but Markram chose not to review the decision.

“In a moment of frustration with his own performance, he lashed out at a solid object, resulting in his injury,” a Cricket South Africa release stated, without specifying what that object was.

The South Africa team doctor, Hashendra Ramjee added that Markram had suffered a fracture involving the wrist bones. The 25-year-old batsman left for home on Thursday morning, with South Africa choosing not to name any replacement.

A contrite Markram said: “It’s sad to be going home on this note and I completely understand what wrong I’ve done and take full accountability for it. It’s unacceptable and to let the team down is what hurts me the most. We understand in sport that emotions run high and sometimes the frustration gets the better of you as it did for me, but like I said, it’s no excuse. I’ve taken full responsibility for it, I have apologised to the team and hopefully I can make it up to them and the people of South Africa soon.”

Markram endured a miserable tour, making scores of 5 and 39 in Visakhapatnam before bagging a pair in Pune.

It may not have been the start India wanted, but Shikhar Dhawan termed the 10-wicket loss against Australia in the first ODI a “bad day in office”. “We played well against the West Indies where all the batsmen performed. As players, we don’t focus too much on things that are not happening. As a team, […]

Kaneria breaks his silence, says Afridi was always against him and ruined his ODI career

The 39-year-old said, beyond his religion, it was difficult for him to think about the reason behind Afridi’s discriminatory behaviour. Source: thehindu.com Related

Rishabh Pant’s ascendancy as India’s premier Test wicketkeeper has not made Wriddhiman Saha “insecure” even one bit as he doesn’t believe that he is in competition with the Delhi gloveman. Saha, one of India’s more technically accomplished keepers, has recently made a comeback for Bengal in the Syed Mushtaq Ali Trophy after being out of […]