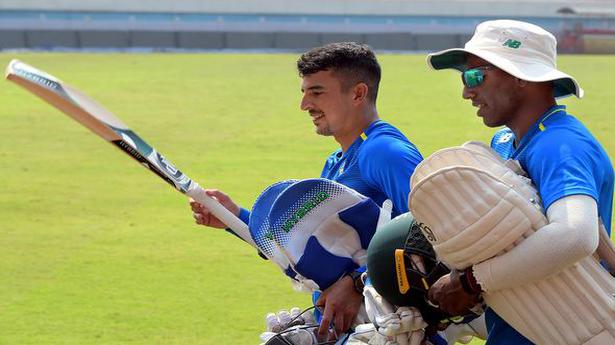 There wasn’t a great deal of resistance from South Africa’s top order in Pune. It cannot have been easy in the first innings, to field for nearly two full days in the Indian sun, watch the runs pile up interminably, and then face down a hungry bowling attack as it tore in.

By the third afternoon, it was clear that the match — and the series — was only headed one way. It can be dispiriting for touring sides when things unravel at that pace. The muscles are sore, tempers are fraying, and it can seem that there is nothing left to play for.

At 2-0 down in the series, against this rampaging Indian team, South Africa is in an unenviable position ahead of Saturday’s third Test at the JSCA Stadium here.

“We’re trying to keep positive,” said Dean Elgar, after the travelling party had arrived in this eastern, industrial town. “It’s immense [to stay positive], especially in the subcontinent. It’s a challenging tour. You get stretched as a person, you get stretched as a cricketer. You get to know yourself quite a lot as a person when you come to the smaller places where the hotels are maybe not as good and you get challenged on the field. It’s always a good learning curve coming to India. It’s the one place I find that they’re very streetwise and clever with the touring teams. They push your boundaries and they test you.”

Despite the state of the series, the South African camp was in no way despondent, the opener insisted. “The senior players are trying to keep the guys motivated. We’re still representing our country, which is an immensely proud moment for every player. It has been a challenging few weeks but it’s not doom and gloom for us. We’re still pretty upbeat. The morale in the camp is pretty good. We still have one game. We can actually change quite a lot within the ranks of South African cricket. We’re still pretty hopeful and pretty positive going into our last Test,” he said.

“We can still get 40 points by following our process against India. That’s something we can’t neglect. We could have had that ‘one foot on the plane’ syndrome, which would’ve happened in the past, but hopefully it doesn’t happen in this Test.”

Elgar spearheaded South Africa’s fightback in the first Test with a doughty 160, but he has since been dismissed for scores of 2, 6 and 48.

“We neglected our pointers while batting in the second Test,” he said. “It’s not acceptable, not having guys stretch our innings like we did in the first Test. Hopefully we can go back to the basics of the game and put up a good performance.”

It will take much doing.

In a move which would also indirectly convey a clear message that there would be no IPL this season, Hyderabad Cricket Association secretary R. Vijayanand, in a letter to the Telangana Chief Minister K. Chandrasekhara Rao on Wednesday, offered to let the Rajiv Gandhi Stadium for setting up isolation centre for the coronavirus-affected patients. Right […]

Pakistan spin legend Saqlain Mushtaq hailed former India captain Sourav Ganguly on his current role as president of the Board of Control for Cricket in India (BCCI). The pair has faced each other a few times on the pitch and Saqlain shared an interesting anecdote about Ganguly from their playing days. “When India was touring […]