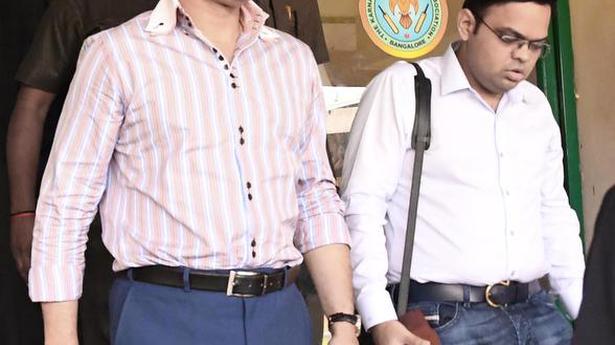 Sourav Ganguly and his new team of BCCI office-bearers visited the National Cricket Academy (NCA) here on Wednesday, meeting Rahul Dravid to discuss the way forward for the facility.

Dravid, the NCA’s Head of Cricket, delivered a detailed presentation, with a revival of the NCA’s status as a centre of excellence said to be on top of the agenda. The NCA, originally envisioned as a nursery of talent, has in recent years seemingly turned into a rehabilitation centre for injured players.

The BCCI’s office-bearers — president Ganguly, secretary Jay Shah, treasurer Arun Singh Dhumal, vice-president Mahim Verma and joint-secretary Jayesh George — were understood to have been impressed with Dravid’s presentation and his blueprint for the NCA’s future.

“All the office-bearers wanted to meet Dravid, and it was a very good meeting,” said sources. “He spoke at length on how to take NCA and Indian cricket forward. It was a very detailed presentation. The NCA has turned into a rehab centre but Dravid wants to turn it into a centre of excellence which it used to be. He focused largely on developing grass-roots cricket.

“He feels that once talent at grass-roots level is strong, the national team will also be strong.”

Also on the agenda of the meeting, which lasted three hours, was a vision for the NCA’s new facility, set to come up near the international airport. The BCCI had been trying for over a decade to move the NCA out of the premises of the M. Chinnaswamy Stadium. In 2017, it finally completed the purchase of 40 acres of land, in the Devanahalli Aerospace Park area.

The BCCI office-bearers heard a proposal about the construction of a new NCA complex here. “The land for the new NCA was acquired during the CoA regime and because the BCCI was in limbo, we couldn’t proceed with building the new facility,” said sources.

“Now that the committee is in place, building a world-class state-of-the-art NCA is one of the BCCI’s primary objectives. The presentation made was very good. We will now place the matter before the Apex Council and try and get this project started as soon as possible.”

Ganguly was scheduled to visit the site in Devanahalli in the evening before flying home.

South African pace great Dale Steyn on Saturday rated the current Indian fast bowling unit as the best in world cricket. Steyn, who was bought by Royal Challengers Bangalore at the 2020 Indian Premier League (IPL) auction on Thursday, responded to a variety of questions during an interactive session with his fans on social networking […]

The packed house at the Wankhede on Wednesday must have wondered why K.L. Rahul is in and out of Team India. Someone who cut his teeth in international cricket five years ago with a 110 against Australia in his second Test in Sydney, ought to have established permanency in the national team. Terrific outing Rahul […]

Ganguly, Dravid have a ‘general meeting’

The Board of Control for Cricket in India (BCCI) persident Sourav Ganguly had a long meeting with National Cricket Academy (NCA) director Rahul Dravid at the Board’s headquarters on Thursday. It has been learned that the duo deliberated on the roadmap for the academy in a two-hour long meeting. Dravid did not take questions from […]