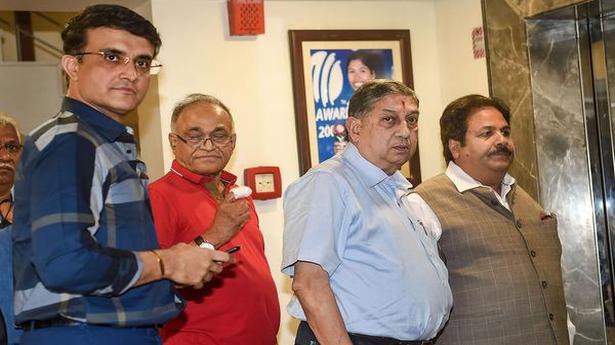 As a batsman Sourav Ganguly used to dance down the pitch and more often than not lift the ball into the stands.

That was the attitude he demonstrated when the BCCI members met here on Sunday to choose the president to steer the policy-making nine-member Apex Council that would come into place on October 23.

The 47-year-old — who played 15 years of international cricket, led India with distinction, showed leadership qualities and the stomach for a fight — expressed interest in the post (honorary capacity) and went after it conveying to the full members that he would not settle for anything less.

And, after an evening of uncertainty, the movers and shakers in the BCCI — mainly Union Minister of State for Finance and Corporate Affairs Anurag Thakur — managed to have their way.

There were whispers of a powerful ruling party politician, whom Ganguly had met in New Delhi, conveying his choice and wanting it to be executed without fuss.

And a former India player and an experienced administrator, Brijesh Patel, fell by the wayside. He was offered the post of IPL chairman and he took it with dignity.

With the new BCCI administration to take charge from the Committee of Administrators, after 33 months, the cricketing fraternity was keen on seeing fresh faces.

Ganguly, having helmed the Cricket Association of Bengal, threw his hat in the ring. The basket was virtually empty for the full members. To most, Ganguly fitted the bill better than Brijesh, almost 20 years older than the ‘Prince of Calcutta’.

One would definitely expect Ganguly to make an impact, articulating views on the game and its administration. He will be his own man. He has already shared his priorities and thoughts.

During an interaction after filing his nomination, he spoke about the irritating conflict of interest issue:

“Conflict is an issue. Whether you will actually get the best cricketers in the system, you are not too sure… as they will have other options and because if they come into this system and not get to do something which is their livelihood, then it gets difficult to be part of the system. It needs to be looked into.

“Look at all the appointments that has happened in various forms — be it CAC, NCA — there has been an issue with everything. That issue needs to be sorted out.”

Ganguly is also happy with the Indian team’s performance. He said: “Cricket on the field has been brilliant for India.

“The team has played exceptionally well after the World Cup semifinal exit and hopefully that will continue. Development of cricket involves infrastructure. It is our job to ensure everything is in the right frame.”

He emphasised that his focus would be on First Class cricket.

“I have been vocal about First Class cricketers, especially because of the amount of time they dedicate. That’s your base.

“ I have written in the last three years that their remuneration needs to increase manifold. That’s going to be my first priority, to set First Class cricket in order.”

Immediate target is to do well in the IPL, says Vihari

G. Hanuma Vihari went down the memory lane when he stepped into the St. Andrews School (Bowenpally) here on Tuesday after a decade. For, it was here he learnt the basics thanks to mentor and coach K. John Manoj, before donning the state colours and then making it to the national team. Vihari recalls that […]

Tamil Nadu had travelled all the way here, hoping for an outright win and a miraculous entry into the knockout stage. However, it had to return home with just a point as Chirag Jani’s defiant unbeaten 124 (292b, 10×4, 2×6) saw Saurashtra gain the first innings lead in their Ranji Trophy Group B match at […]