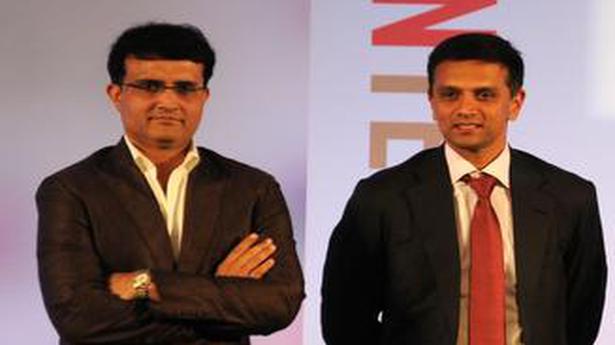 Longtime teammates Sourav Ganguly and Rahul Dravid will reconnect in Bengaluru on Wednesday as BCCI president and head of National Cricket Academy respectively to discuss the roadmap of Indian cricket’s feeder line.

Dravid, who took charge as NCA chief in July, has already drawn a roadmap for the institution and Ganguly is expected to give his inputs when the two former captains meet.

The meeting will be attended by all the newly elected BCCI office-bearers who took charge on October 23. NCA CEO Tufan Ghosh will also be part of discussions.

Ganguly and Dravid have been together at a few BCCI technical committee meetings, which the ‘Prince of Kolkata’ chaired and Dravid attended as India U-19 and A team head coach.

For the past few years NCA, which was supposed to be the supply line of Indian cricket, has actually become a rehabilitation centre, which even Ganguly acknowledged after taking over.

Ganguly is expected to be updated on the new NCA project, which is being developed.

“Ganguly and Dravid will be discussing the way forward for NCA and the issues it faces,” a BCCI official told PTI.

It is there to be seen whether the new president seeks details on the rehabilitation plans of players like Prithvi Shaw, who will be back from doping ban, along with strength and conditioning programmes for Jasprit Bumrah and Hardik Pandya.

Many former players including V.V.S. Laxman and India head coach Ravi Shastri have high expectations from the celebrated duo of Ganguly and Dravid.

“If you ask me one thing, it would be how Sourav can revive the NCA. The greatness of this Indian team is their bench strength,” Laxman had said last week.

Priyam Garg led from the front with a 103-ball 110 as the India under-19 team outclassed host South Africa by 66 runs to make a winning start to the four-nation one-day series here on Friday. Electing to bat, India posted 264 for five with Priyam, picked by Rajasthan Royals for ₹1.90 crore in the last […]

Justice (retired) Fazal-e-Miran Chauhan submitted his detailed judgement on the case to the Pakistan Cricket Board, which made it public on Friday. Source: thehindu.com Related