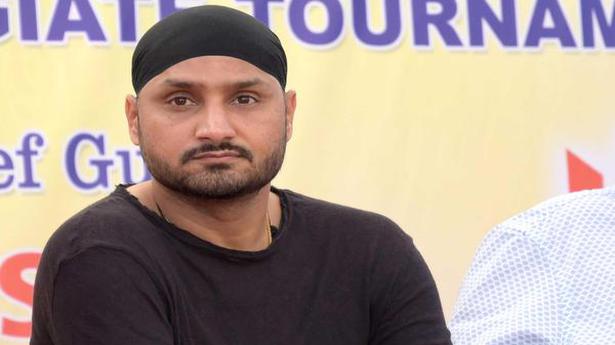 The Punjab government has ordered an inquiry into the allegations levelled by veteran India player Harbhajan Singh that delay in paperwork on the part of the State’s sports department was the reason for not getting prestigious Khel Ratna Award.

The off-spinner’s nomination for the Khel Ratna award has been rejected by the Ministry of Youth Affairs and Sports (MYAS) on the grounds that his documents reached late.

Harbhajan requested Punjab Sports Minister Rana Gurmit Singh Sodhi’s intervention in the matter and the minister subsequently ordered a probe into the alleged delay in sending his documents to the Centre.

“I have ordered an inquiry into the matter. The director (Sports) has been tasked to carry out the inquiry,” Mr. Sodhi told PTI on Wednesday.

In a video uploaded on his Twitter handle, Harbhajan claimed he had timely submitted his form for the nomination to the Punjab sports department for the award.

“I have come to know through media that a file recommending my name for Rajiv Gandhi Khel Ratna award sent by Punjab government to the Centre has been rejected with the reason being that papers reached very late,” Harbhajan said.

“I have come to know that because of the delay, my nomination will not be considered for this award this time and because of which I will not get this award,” he rued.

Harbhajan claimed that he furnished the relevant documents on March 20 but now he understands that there was a delay in sending his papers to the Centre that ultimately led to his rejection.

“As far as I (can) recollect, I submitted papers on March 20 with your (Sodhi) office and this form was supposed to reach Delhi within 10-15 days and why it was not submitted timely. Had this form submitted timely, I probably would have got the award this year which comes as a motivation and encouragement for any sportsperson,” he further said.

The cricketer, who is the third-highest wicket-taker for India in Test cricket, requested the Minister to re-send his application for next year.

“If such delays continue to take place then players will lag behind which is not right and I hope you (Sodhi) will take action on it and forward my nomination again to the government of India,” said Harbhajan.

Spinner Rashid Khan claimed five wickets to put Afghanistan in sight of their maiden Test victory after bowling out Ireland for 288 on day three of the one-off game on Sunday. Chasing 147 to win, Afghanistan were 29 for one at stumps. Ihsanullah Janat, on 16, and Rahmat Shah, on 11, were batting at close […]

South Africa will radically overhaul their management team, including saying goodbye to coach Ottis Gibson, as they instead move to a football-style new structure. West Indian Gibson will not have his contract renewed after a disappointing World Cup in England, where the South Africans won only three of their nine matches and were never in […]