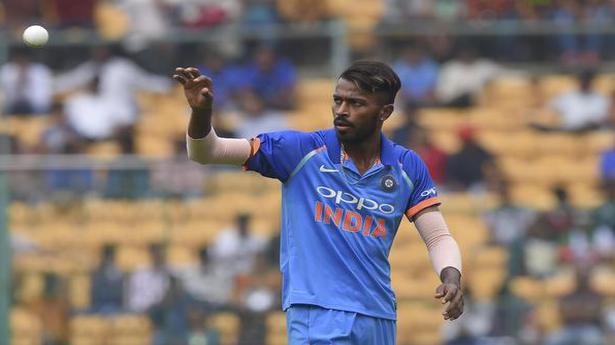 Hardik Pandya, who continued his good run with the bat to help India seal the T20I series against Australia in Sydney on Sunday, said he had been focusing on finishing games during the off-season earlier this year.

Hardik, whose unbeaten 22-ball 42 helped India chase down a target of 195, said, “The biggest goal during the lockdown was to focus on finishing games when it matters the most. That was my plan and, that was the learning throughout. I had a chat with my brother Krunal about this always.”

On a day when close to 400 runs were scored, T. Natarajan finished with two for 20. Hardik said he thought that the left-arm pacer would have been the ‘player-of-the-match.’

“He got us the break and the runs he saved proved to be the difference. For the kind of start Australia had, I felt that they were short by 10-15 runs and knew we could win if we batted well,” said Hardik.

“I am so impressed with him [Natarajan] because he keeps it very simple and doesn’t complicate things. If you tell him ‘go bowl a yorker or a wide slower one’, he goes and does that. It is a learning for a lot of people that if you keep it simple, it can benefit you,” he said.

England bowled South Africa out for 274 runs on Monday to win the fourth Test at The Wanderers by 191 runs and ensure an emphatic 3-1 series victory. Mark Wood took four wickets as the home team crumbled in the evening session after threatening to offer stoic resistance earlier in the day. England completed the […]

Bumrah will be indebted to Virat just like I am grateful to Ramesh: Harbhajan

Harbhajan Singh believes Jasprit Bumrah will forever remain indebted to Virat Kohli’s “gut feeling”, which got him the hat-trick, just like he is grateful to Sadagoppan Ramesh for an incredible catch at forward short-leg 18 summers ago. Harbhajan, India’s first-ever hat-trick man in Test cricket, lauded Bumrah, who became only the third (Irfan Pathan was […]

Coronavirus | Professional cricket in England suspended till May 28

The England and Wales Cricket Board (ECB) has suspended all professional cricket till May 28, delaying the start of the new season, due to the COVID-19 pandemic. The ECB took the decision following discussions with the First Class Counties, the Marylebone Cricket Club (MCC) and the Professional Cricketers’ Association (PCA). “It was agreed that, given […]