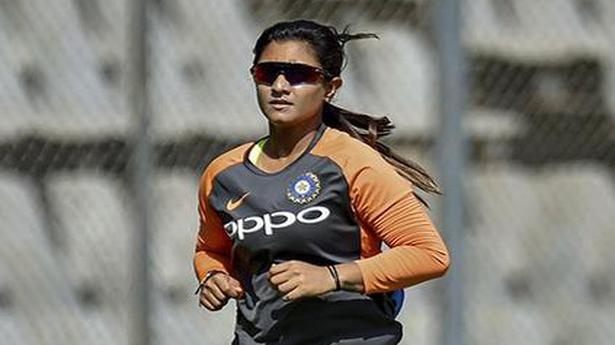 She was one in hundreds, literally.

Taniya Bhatia used to be the only girl who wanted to play cricket in Chandigarh, the city which has given India some of its finest players like Kapil Dev and Yuvraj Singh. Since girls didn’t care for cricket, she competed with the boys.

That didn’t bother her. All she wanted was to play cricket.

Then, she discovered that she could play it quite well. So did the world, before long.

At the beginning of this year, Taniya was named one of the five breakout stars in women’s cricket by the ICC. That was after she became the most successful wicketkeeper at last year’s World T20 in the West Indies. She had nine catches and two stumpings — more dismissals than anybody else.

“My ambition has always been to be the best in the world,” Taniya told The Hindu here on Tuesday. “Playing at the World T20 was a dream-come-true; now I am looking ahead to its next edition, which is just 11 months away.”

She hopes to improve her batting by then. Though she has been quite impressive behind the stumps — look at the agility with which she effects her stumpings, you will realise she is a natural — she isn’t happy with her show in front of it, especially after the fine start she has had to her international career.

Last September, playing only her second ODI, she scored a 66-ball 68 to help India beat Sri Lanka at Galle. A week later, she slammed 46 off 35 balls in India’s victory over the same opponent in the first T20I at Katunayake.

“I am working hard on my batting; I want to be more consistent,” she said. “I want to score heavily, like Sarah Taylor and Alyssa Healy.”

She has always admired Taylor. “And she is such a friendly person, too” she said. “She gave me tips on keeping.”

Another person she receives tips from is former Test ’keeper Kiran More. “He follows my games and tells me how to improve my keeping,” she said. “I am grateful to him.”

As for the current male wicketkeepers, her favourite is M.S. Dhoni. “I like him not just for his keeping, but his temperament as well,” she said. “He is so cool and calm, always.”

She also likes the calmness with which some of her illustrious teammates handle challenging situations. “It has been a privilege keeping to Jhulan Goswami and batting with Mithali Raj and Smriti Mandhana,” she said. “Sometimes it is difficult to believe I am playing along with them.”

Maybe she hasn’t quite realised that she herself has become one in hundreds of thousands.

Once Prithvi Shaw stood tall, by comparison, even Andre Russell’s mighty contribution was dwarfed. But all that was pushed into the background once Delhi Capitals faltered in the final over of its chase of Kolkata Knight Riders’ 185 and left the match tied. In the Super Over bowled by Prasidh Krishna, Delhi scored 10 for […]

England’s Rory Burns added just eight runs to his overnight total as the hosts lost four wickets in the morning session on day three of the first Ashes test as they reached 328-8, with a first innings lead of 44 runs at Edgbaston. Resuming on 267-4, England World Cup hero Ben Stokes reached his 18th […]

‘Bowlers did their job, batsmen have to step up’ Source: thehindu.com Related