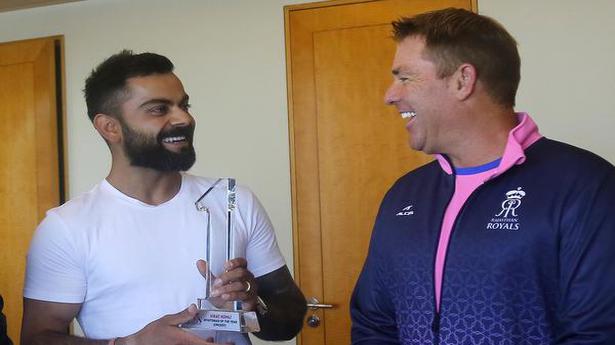 To bowlers bruised and battered, and faced with the frightening prospect of again running into Virat Kohli, spin great Shane Warne offered an advise: bowl at either leg or wide of off stump, but not at the stumps.

“If you’re going to bowl to Virat Kohli, you either bowl at leg stump and protect the on-side, or you bowl wide of off stump and you protect the off-side. You cannot bowl at the stumps, because he can hit you both ways,” Warne was quoted as saying ESPNcricinfo.

Warne plotted Kohli’s dismissal if he were to actually bowl to him.

“I’d be bowling wide of off stump and letting him try to cover drive with a slip, short cover and some protection out there. So then it’ll be very hard for him to get it over the leg side. That’s what I’d be trying to do and hopefully get a little bit lucky and he mis-hits one.”

Warne said he has not seen anyone “dominate” ODI cricket like Kohli has, but steered clear of calling him the greatest of all time.

“I got asked the question last night and again this morning: Is Virat Kohli the best player in one-day cricket? Is he better than Tendulkar, is he better than Lara? I’m still thinking about it, I’m still trying to work that out.”

Since the start of 2016, Kohli has amassed 3985 runs in 59 ODI innings, maintaining a staggering average and strike rate at the same time.

“As a player, playing against them, Lara and Tendulkar were the two best players that I bowled to.”

Pakistan’s Test captain Azhar Ali on Wednesday said he will “step aside” from the role if he is unable to contribute substantially to the team’s cause, candidly admitting his run-drought. “I am going through a bad patch but I am not out of form. I am middling the ball well. It is a matter of […]

The most coveted job in Indian cricket is not that of the coach or captain, it is the President of the Board of Control for Cricket in India. In recent years, the incumbent has automatically become the most powerful man in the game, respected and hated in equal measure from Mumbai to London and from […]