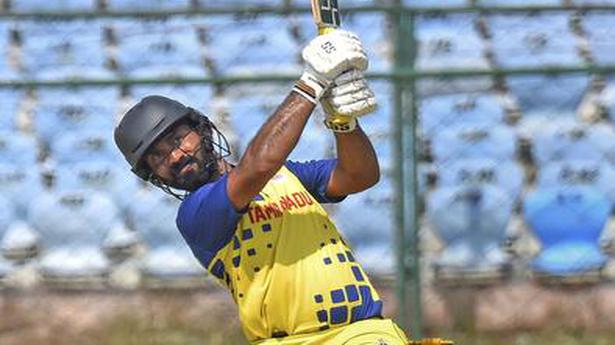 Dinesh Karthik played some blinders here these past three weeks.

During Tamil Nadu’s remarkable campaign in the Vijay Hazare Trophy tournament, there was a 97 off 62 balls against Bengal and then an even more savage 65 not out off 28 balls against Madhya Pradesh.

His footwork was quick, timing sublime. Then, he was neat behind the wickets and used his bowlers imaginatively.

He is indeed quite happy with the way things have gone for him personally and the team.

With the T20 World Cup around the corner, he could not have timed those belligerent knocks better.

“I am glad I could make all those runs with just a few overs remaining, with the World Cup coming up,” Karthik told The Hindu. “I know it is easy for me to bat in the top four and make big runs, but what I am trying to do is to stand up when the team is under pressure. M.S. Dhoni has done it for India for so many years.”

He believes he could don a similar role for India.

“I have done that often for the country, like at the Asia Cup last year and in some of my recent T20I matches,” he said. “I relish my role as a finisher. That’s one of my strengths. Whenever I get an opportunity, I am confident I can win matches.”

Karthik said he enjoyed leading Tamil Nadu to the stunning sequence of victories here — nine out of nine.

“I have a set of boys who believe in me,” he said. “We stuck together as a team. Whenever we had the upper had, we didn’t let go.”

“He is one of the power-hitters, the likes of whom are very few in India,” he said. “He looks impressive.”

Karthik had also been in the news recently, for the wrong reasons, in the media in Kerala.

“Yes, I have heard about (former India seamer) S. Sreesanth’s comments that I was responsible his ouster from the Indian team,” he said, smiling. “Even to react to an allegation like that will be silly.”

There is no one better than Virat Kohli when it comes to chasing down totals in white-ball cricket, something that India’s newest No 4 Shreyas Iyer wants to emulate on a consistent basis in coming days. With a half-century and 44 off 33 balls in the successful chases in the first two T20 Internationals, Iyer […]

Within a span of a few hours, Abhimanyu Mithun found himself in the news for two contrasting reasons. On Friday it emerged he has been summoned by the Bengaluru police for questioning in connection with match-fixing allegations in the Karnataka Premier League 2019, that surfaced earlier this month. Later in the day, the former India […]

After winning the first Test against England, South Africa skipper Faf du Plessis termed Ben Stokes’ dismissal as huge. “Even though Kesh (Keshav Maharaj) didn’t bowl as much as he would have liked, the wickets he got for us in the second innings were huge,” Sport24.co.za quoted du Plessis as saying. Maharaj bowled Stokes in […]