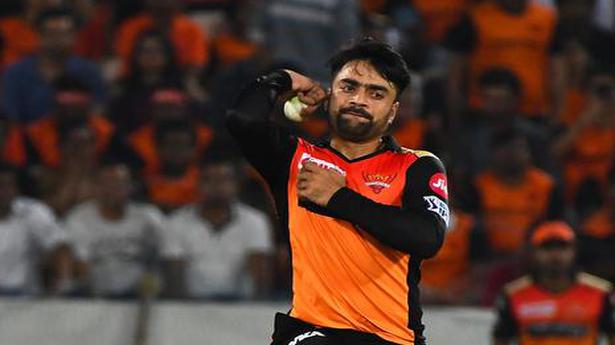 M.S. Dhoni has been a great finisher for Chennai Super Kings and the team might have missed him on Wednesday felt Sunrisers Hyderabad leg-spinner Rashid Khan.

“He is always known for this ability and take the team to scores of 170-plus consistently,” said the leg-spinner at the post-match press conference.

Rashid said that he has always strived to be economical and bowl more dot balls. “The batsmen are more careful this season and the wickets too are different and not turning much,” he said.

“Frankly, it doesn’t matter whether you bowl first or second. You should always do the little things right if you want to play good cricket. We bowled according to the plan for each batsman,” Rashid said.

On fellow leg-spinner Imran Tahir, Rashid said it was wonderful feeling seeing him, especially the way he celebrated a dismissal. “We always speak lot on what we have to do under pressure. Has been sharing his experience with me,” he said.

“It was a precautionary move to rest MS ahead of the business-end of the IPL. We got strangled and felt 165 score would have been very competitive as has been the trend in the recent games where teams struggled chasing such scores,” CSK coach Stephen Fleming said.

“They bowled well and we didn’t bat well. We fell short in all departments. But, we don’t over-analyse and are good enough to work on certain issues. We have the resilience to move on,” he added.

“I know Rayudu is disappointed (on being ignored for World Cup). But, he has got a job to do us for us. He’s got to make sure he handles with class and performances. He is pretty good in that. It is time for him to refocus,” Fleming said.

The head coach also said that they would like to focus on each game and not think about the final despite being the current table-topper.

He was fast, skiddy and attacked the stumps from a good length. On a surface of uneven bounce, Mohammed Shami was deadly. Sizzling on a Sunday, Shami ripped open the heart of the South African batting with three wickets — in two bursts — before lunch and then returned to snuff out the resistance from […]

The choice of left-arm spinner Ravindra Jadeja as India’s sole specialist spinner in the ongoing first Test against the West Indies has left Sourav Ganguly flummoxed. The spinners sitting out are R. Ashwin and Kuldeep Yadav. The ex-India captain said: “I was surprised to see Kuldeep Yadav left out. “If you remember, in Sydney on […]

Former India captain Kapil Dev gave credit to New Zealand for its performance in the first Test at Wellington in the ongoing series. “In the last 50 years one thing that New Zealand has shown is big commitment to the game. They may not have big names but they are able to perform consistently,” said […]