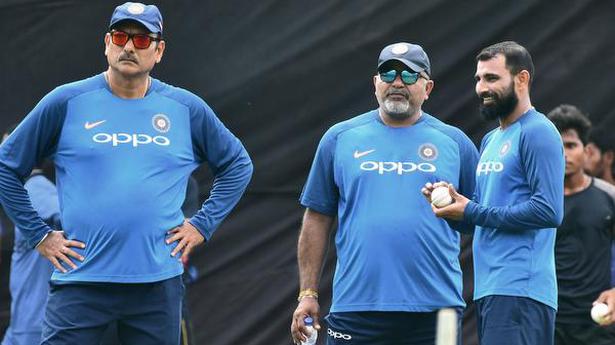 Bharat Arun, India’s bowling coach, shared his thoughts in an exclusive chat with The Hindu on Monday, focussing on the ICC ODI World Cup.

Could the Indian bowlers be a little jaded entering the World Cup after a gruelling IPL?

I think they were used judiciously by the teams and given sufficient rest during the IPL.

This World Cup will be particularly strenuous with each team having to play nine matches in the league before the knock-out stage.

The management of workload will be crucial and that will be decided by the captain, the coach, myself, the fitness trainer and the physio.

How’s the mood in the camp? How does the team plan to cope with the massive World Cup pressure?

The mood in the team is upbeat. Skipper Virat Kohli is such a very positive person. And coach Ravi Shastri is a very good man-manager and motivator.

The trick will be to embrace the pressure. We will have to break the process into compartments, just focussing on the next delivery for instance, and live in the present.

If the recent ODI matches in England are any indication, this could be a high-scoring World Cup.

Yes, the conditions have been favouring batting in England. And in ICC tournaments, the pitches are particularly good. But you can never tell about weather in England. If the conditions become overcast, the ball will start swinging.

Can Kuldeep Yadav regain confidence after a horror IPL?

Kuldeep will be a different bowler in the World Cup. He is a rarity, knows his strengths and variations.

The advantage of having two wrist-spinners, Kuldeep and Yuzvendra Chahal, in the side is that they are not dependent on the pitch to turn the ball.

It was a conscious move by Kohli and Shastri to have wrist spinners after the Champions Trophy in England because they can turn the ball on any surface and pick wickets in the middle-overs. And we need to attack in the crucial middle-overs. Then Ravindra Jadeja’s left-arm spin can be handy if there is assistance from the surface.

Pace bowling is India’s strength. Mohammed Shami is at the peak of his powers now.

The manner he runs in is the key to his bowling. And the way he runs in has a lot to do with his fitness levels. And Shami, thanks to physio and fitness trainer, is extremely fit now and that is showing in his bowling.

Bumrah too is buzzing around, like in the IPL final.

He is the best paceman in the world, across formats,. His action, movement, yorkers, changes of pace and awkward bounce make him deadly at any stage.

Bhuvneshwar Kumar has been struggling a tad lately.

We expect him to pick wickets in England with the new ball with his swing. And he can bowl terrific yorkers at the end. Then, of course, Hardik Pandya gives the team balance, has speed. And Vijay Shankar is releasing the ball better and attacking the stumps more.

Dhoni’s inputs behind the stumps are invaluable.

He is so cool and it rubs off on the bowlers. Then he gives inputs to the bowlers, plans dismissals with them.

Apart from India, which other teams have a chance to win the World Cup.

India is one of the favourites but in this World Cup, there are several contenders. Consistency will be the key.

Virat Kohli may have stated that the Indian Premier League (IPL) form will have no bearing on the World Cup selection. However, Zaheer Khan, the legendary left-arm pacer, feels it will certainly be a factor to freeze one or two slots still open in India’s World Cup squad. “Well, you look at the past. Has […]

Dhoni’s practical approach has been his biggest asset

Mahendra Singh Dhoni’s elder brother Narendra Singh Dhoni says, “Mahi is a footballer-turned-cricketer, while I am a cricketer -turned-footballer. “Perhaps Mahi does not know about my cricket. I played for the school football team as goalkeeper in several National-level events,” says Narendra. “Mahi’s contribution in the two finals was the biggest — placing a short […]

Delhi Capitals won the toss in Jaipur and opted to bowl first against Rajasthan Royals. Capitals brought in allrounder Chris Morris for spinner Sandeep Lamichhane. The Royals were unchanged.   (If you are viewing this page on The Hindu app, click this link to view the scorecard) Sometimes, all a team needs is just one […]