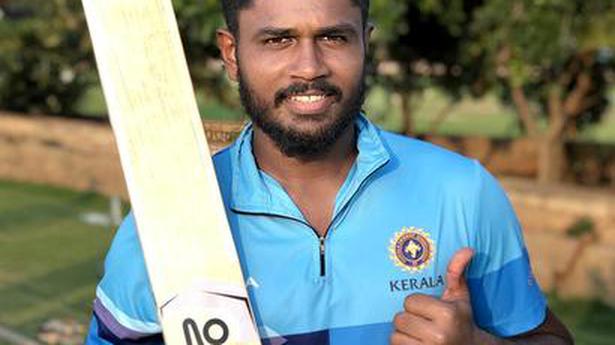 Inconsistency is a criticism often levelled against Kerala wicketkeeper-batsman Sanju Samson. This came to the fore in the ongoing Vijay Hazare Trophy here, when after scoring a record-breaking unbeaten 212 against Goa a few days ago, Samson fell for 15 and 0 in the next two outings.

Samson, however, is not keen on earning the ‘Mr. Consistent’ tag. “Everyone says I need to be consistent, but if you want me to be consistent, I have to change my game. I will never do that. I’m happy to score double hundreds every 10 innings rather than scoring 40s and 50s,” Samson told The Hindu after Kerala ended its Vijay Hazare campaign with a victory over Andhra Pradesh here on Wednesday.

“I’m positive and dominant, so there is a bigger risk of getting out. I’m okay with that. I don’t like to stay at the crease for a long time and take up a lot of balls,” Samson said.

On his day, Samson is nearly unstoppable, as evidenced in his whirlwind 129-ball 212 at Alur grounds here. With 21 fours and 10 sixes to his name, the 24-year-old raced to the highest individual score in the history of the tournament.

He was not aware of the records when he was batting. “When I returned to the dressing room, my coach and teammates told me that a batsman from Uttarakhand (Karanveer Kaushal) had scored a double century last year, but I had made the highest score ever. I’m happy, but I’m not really keen on records,” Samson said.

After a good IPL campaign for Rajasthan Royals earlier this year, Samson was forced to take a break for a few months, as he was not picked for any Duleep Trophy and India ‘A’ First-Class teams. The layoff proved to be blessing, Samson stated.

“I felt bad that I didn’t get selected in any team, but looking back, I was very fortunate to get a long break. Playing matches continuously means that you don’t get time to introspect and realise things. The break gave me direction,” Samson said. “Most of all, the time away helped me fall back in love with cricket. If you play matches all year around, you fall out of love. Say you love ‘jalebi’, but you eat it all year, you will forget that it once tasted good. That’s what happens when you play matches continuously — you forget to have fun. I started playing cricket for fun, not to create records. The fun, laugh, smile.. it has come back now.”

Parthiv Patel’s breezy, stroke-filled half-century (76, 60b, 10×4, 1×6) and Priyank Panchal’s unhurried knock (80, 91b, 8×4, 1×6) carried Gujarat to a commanding six-wicket win over Delhi in the Vijay Hazare Trophy quarterfinal here on Sunday. Chasing 225, Gujarat was home and dry with more than 11 overs to spare. Two-paced wicket On a slightly […]

Reigning and former world chess champions Magnus Carlsen and Viswanathan Anand in all likelihood would ring the customary Eden bell on one of the days during the historic day-night India-Bangladesh Test at Kolkata from November 22-26. The Sourav Ganguly-led BCCI, which is organising the first ever day/night Test in India, is awaiting a confirmation from […]