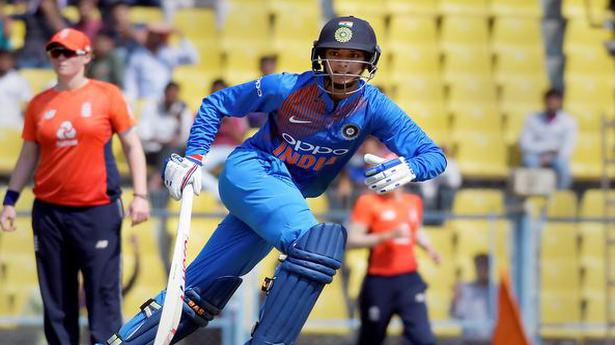 Mandhana, who was the stand-in captain in place of regular skipper Harmanpreet Kaur in the three-match series against England, currently occupies the the third spot in the batting chart with 698 points behind New Zealand’s Suzie Bates (767 points) and West Indies’ Deandra Dottin (725 points).

Young Jemimah Rodrigues continued to sit on the sixth spot while Harmanpreet, who missed the series against England owing to an ankle injury, is ranked 10th.

England’s middle-order batter Natalie Sciver and the opening pair of Danielle Wyatt and Tammy Beaumont all made notable gains in the rankings after their consistent performances in a recent 3-0 series win over Sri Lanka.

Sciver has moved up one place to 13th spot in the list of batters after unbeaten scores of 49, 10 and 11 during the series.

Amy Jones is another one to gain in the latest rankings update carried out on Friday, advancing 25 places to 45th position after scoring 111 runs in the three matches.

Among England’s bowlers, Linsey Smith has moved from 95th to 58th position after taking four wickets in the series, Kate Cross has moved up from 71st to 63rd while Laura Marsh has gone up from 82nd to 64th

For Sri Lanka, Imalka Mendis has moved up 15 places to 94th position and Oshadi Ranasinghe has moved from 172nd to 144th position among batters. Inoshi Fernando has advanced 30 places to 183rd among bowlers.

In the ICC Women’s T20I Team Rankings, India continues to remain in the fifth spot. Australia leads the table with 283 points followed by England on 278 points. Sri Lanka has lost one point and are now on 205 points but remain in the eighth position while the West Indies are fourth.

Australia defended 272 to beat India by 35 runs in the fifth and final ODI in Delhi to win the series 3-2. Australia lost the first two games but bounced back to claim the next three. Australia were powered by Usman Khawaja’s 100. For India, Rohit Sharma top scored with 56 but lost wickets regularly. […]

We are not short of talent: Atapattu

Marvan Atapattu belongs to a generation when Sri Lanka dominated international cricket. Be it the ODIs or Tests, the island nation had enough talent in its ranks to battle the odds. But over the years, things have changed. With some senior players retiring, Sri Lanka has been largely inconsistent. And Atapattu believes that there has […]

Coronavirus | We will talk about IPL later: Rohit Sharma

Sport is of least priority in these troubled times, feels India batsman Rohit Sharma, who wants to talk about IPL only after normalcy returns. Rohit, who has been out of action for last two months due to calf muscle injury was due for a comeback in the Indian Premier League, which has been postponed till […]