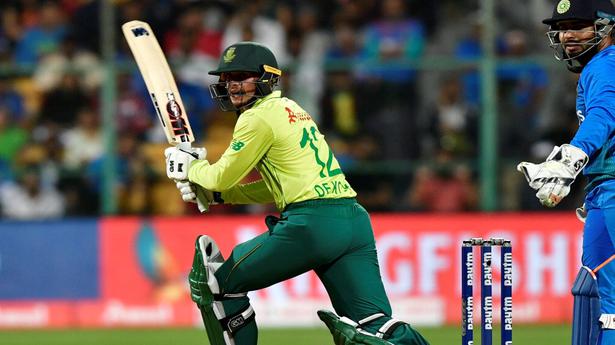 An insipid batting display saw India sink to a resounding nine-wicket defeat in the third and final T20 international here on Sunday. Some questionable shot-making saw Virat Kohli’s men scramble together a modest 134 in 20 overs after winning the toss at the M. Chinnaswamy Stadium.

Quinton de Kock then went on the rampage, smashing an unbeaten 79, as South Africa raced home with 19 balls to spare to level the series.

De Kock’s 52-ball effort contained five sixes, all executed in his trademark style over the leg-side boundary. India’s bowlers failed to make an early breakthrough as de Kock and Reeza Hendricks put on 76 for the opening wicket.

Kohli will be frustrated by a number of things. Primary among them will be his use of the review. India wasted its only review on a frivolous appeal against Hendricks in the sixth over, when Deepak Chahar’s delivery was sliding way down leg.

In the next over, de Kock was trapped in front by Washington Sundar for 28. Umpire Nitin Menon ruled him not out. A little later, replays showed the ball would have crashed into the stumps. de Kock carried on unflustered as South Africa wrapped things up in style.

India won the toss and opted to bat first, Kohli believing his team needed practice in defending totals ahead of the T20 World Cup. But what followed was a poor, chaotic effort that frittered away a bright start. From 62 for one in seven overs, India slumped to 99 for six in 15, and never really recovered.

The home team was unchanged from the second T20 while South Africa brought in the left-arm pacer Beuran Hendricks. The move paid off at once.

In his first over, Hendricks angled a delivery across Rohit Sharma (9) that the batsman pushed at half-heartedly. The resulting edge flew to first slip. Hendricks would eventually finish with excellent figures of two for 14 from his four overs.

India’s early momentum was supplied by Shikhar Dhawan, who picked up from where he had left off in Mohali. He drove Andile Phehlukwayo down the ground, and welcomed Tabraiz Shamsi with a pair of tall sixes. But Dhawan fell to Shamsi for 36, reaching for the ball and lofting it high. Temba Bavuma settled under the catch at extra-cover.

That was the start of India’s troubles. Kohli went for 9, caught within an inch of the deep mid-wicket boundary by Phehlukwayo. Rishabh Pant made a start, getting to 19, before he holed out to long-off against the left-arm spin of Bjorn Fortuin. Shreyas Iyer unwisely charged down the pitch two balls later. Fortuin dragged it down the leg-side, and Shreyas was comfortably stumped.

The stadium crackled with anticipation when Hardik Pandya arrived at the crease. But he failed to produce the fireworks the crowd craved. Ravindra Jadeja managed just the solitary six as South Africa’s death-overs bowling proved watertight.

Sarfaraz Khan (226 n.o., 213b, 32×4, 4×6) continued his sensational form with a stellar unbeaten double hundred to bail Mumbai out of trouble on the opening day of the Ranji Trophy Group B match against Himachal Pradesh at the scenic HPCA Stadium on Monday. Sarfaraz’s belligerent innings, days after his unbeaten 301, along with sensible […]

Cricketing tales hang on slender threads. The opportunity appears and then disappears. Chennai Super Kings allowed its moment to fly away. Not appealing for a caught behind when Harbhajan Singh got a delivery to dip, turn and bounce at the left-handed Evin Lewis (on 12), was a match-altering point of the contest. Wicketkeeper Ambati Rayudu, […]

England fast bowler James Anderson has been ruled out for the rest of the Ashes series against Australia due to a niggling calf injury, the country’s cricket board (ECB) announced on Friday. Anderson, who was playing for county side Lancashire’s second XI in a friendly against Durham earlier this week, felt pain in his right […]