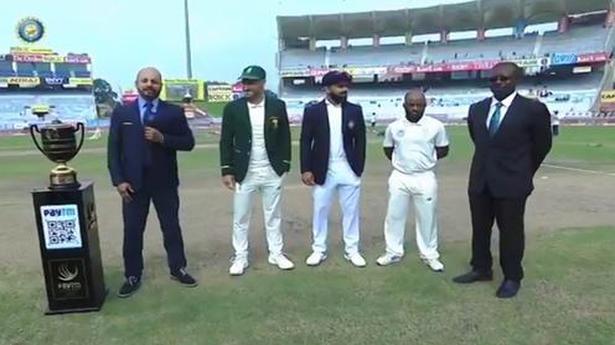 Leading into the match, Faf du Plessis suggested that given his rotten record at the toss — he had lost 13 of his previous 19, and South Africa had lost nine tosses in a row in Asia — he might send someone else instead.

It turned out he was not joking. On Saturday morning, Temba Bavuma walked out alongside du Plessis for the toss, and it was the vice-captain who called. It did not help, though, as South Africa lost yet again.

Not everyone was impressed with the move. “I thought it was pathetic, to be brutally honest,” former South Africa captain Graeme Smith fumed on air. “It just shows the mindset of the team. I didn’t enjoy seeing that. They’re looking in the wrong places. If you play well enough you can still compete.”

In what appears to have become a trend this series, there were two instances of fans entering the field of play on the opening day of the third Test.

One man ran towards Quinton de Kock, embraced the player and then touched his feet. He was mobbed and struck by security personnel, before being led away.

His footwear, though, had come loose and lay on the turf next to de Kock. The South African picked the slipper up, wondering what to do with it before handing it over to ground-staff.

The crowd cheered, but the JSCA did not presumably see the funny side.

Former Bangladesh captain and national selector Habibul Bashar is shocked that a “mature” man like Shakib Al Hasan didn’t report corrupt approaches to the ICC and believes it would be tough, if not impossible, for the banned all-rounder to regain his peak position. The world’s No.1 ODI all-rounder was on October 29 banned by the […]

Interim measure, it will be back to normal once COVID situation under control: Kumble on saliva ban

The ban on saliva has elicited mixed response from the bowlers. Source: thehindu.com Related

Jos Buttler is auctioning the shirt he wore in last year’s dramatic World Cup final win in support of hospitals treating the coronavirus. The 29-year-old wicketkeeper/batsman played a key role in England’s thrilling defeat of New Zealand at Lord’s in July, scoring a fifty, batting in the Super Over and then running out Martin Guptill […]