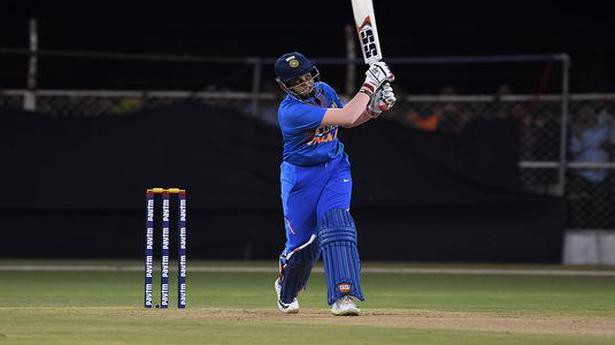 There was cricket, finally. The women’s T20I series, badly affected by persistent rain over the last few days, resumed on Tuesday. And India clinched it in style.

The 51-run victory in the fourth match at the Lalbhai Contractor Stadium, in front of another big crowd, gave the host an unassailable 2-0 lead, with the last game to be played on October 4 (the second and third games were washed out). It was truly a dominant show by the Women in Blue against a South African side that failed to give a fight in either innings.

The match was reduced to 17-overs-a-side after the game began an hour late because of a wet outfield. A lot went right for India, the host’s win fashioned by 15-year-old opener Shafali Verma and the Yadav spin duo of Poonam and Radha, who took five wickets between them.

There were several highlights in the Indian innings, such as the fearlessness showed by Shafali Varma, the brief spell of ferocious hitting by skipper Harmanpreet Kaur and the sweet timing of Jemimah Rodrigues. But, it was the lowlight that decided the course of the match: the fielding of the visitors.

It was as if they had forgotten how to catch, after being denied play and practice for so long. For most of the innings, there seemed to be a contest going on among them: who will drop the next catch?

That was after the South African captain Sune Luus decided to field first. She would not have anticipated her side would soon be dropping catches aplenty.

On a night like this and in front of a crowd like this, and at the time of the Navaratri festival, the Indian women were not going to say no to all those gifts. Especially Shafali, the girl who just loves to whack the ball.

She had been dropped in the second over while on five, by Lara Goodall at mid-on off Ayabonga Khakha, and then by Laura Wolvaardt, who ‘helped’ the ball sail over deep mid-wicket for six. The teenager from Haryana hit another six and five fours in her 33-ball 46.

She had put on 52 for the first wicket with Smriti Mandhana, someone the South Africans seemed desperately wanted to strike form; the left-hander was dropped four times during her 19-ball stay.

Jemimah, however, ensured that the contest would also be remembered for the right reasons, as she played some lovely strokes and added 40 for the fourth wicket with captain Harmanpreet. That association, and some brisk batting by Deepti, gave it a total it could defend.

David Warner, with 611 runs from 11 games, has been a leading light for Sunrisers Hyderabad in this edition of the IPL. And with the flamboyant opener set to play his final game this season for the Sunrisers before joining the Australian team as it prepares for the forthcoming World Cup, the home side will […]

Shivam Dube led India-A’s spirited comeback from 20 for five with an aggressive knock before pacer Sandeep Warrier struck thrice to leave West Indies-A reeling in the second innings on day two of the second ‘Test’ here on Thursday. Dube (79, 85b) and opener Priyank Panchal (58, 125b) shared a 124-run stand for the sixth […]

My fallout with Taylor a stain on NZ cricket: McCullum

Former skipper Brendon McCullum, describing his fallout with Ross Taylor a “bad stain for New Zealand cricket”, attributed it to a race for captaincy between the two in 2011, and admitted that they still aren’t the best of friends despite mutual respect. Taylor, who is still active in international cricket, took over the captaincy after […]